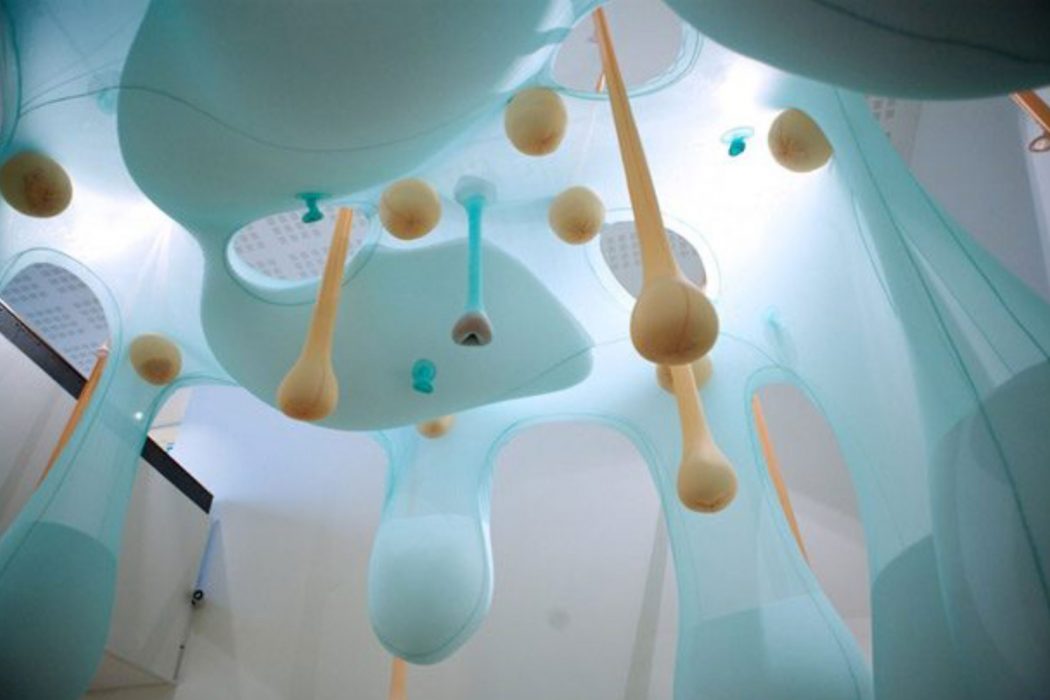 … our poor body, so vulnerable to swords, to guns and to viruses, is space-proof.

Image: Ernesto Neto, The Body that carries me, 2006

What I would like to experience most of all would be to find myself freed, even if only for a moment, from the weight of my body. Not that it is excessive –oscillating within a reasonable spectrum– and yet I feel intensely envious of those weightless astronauts whom we are permitted to see all too rarely on our TV screens. They seem as much at ease as fish in water: they move elegantly around their cockpit – these days quite spacious – propelling themselves forward by pushing gently off invisible walls, and sailing smoothly through the air to berth securely at their work place. At other times we have seen them conversing, as if it were the most natural thing – one of them ‘the right way up’, the other ‘upside down’ (but of course in orbit there is neither up nor down). Or we have seen them take turns to play childish games: one flicks a toffee with his thumbnail, and it flies slowly and in a perfectly straight line into the open mouth of his colleague. We have seen an astronaut squirt water from a plastic container into the air: the water does not fall or disperse but settles in a roundish mass which then, subject only to the weak forces of surface tension, lazily assumes the form of a sphere. What do they do with it then? It can’t be easy to dispose of without damaging the delicate structures upholding its surface.

I have also often wondered about the experiments, or more particularly the simulation courses which aspiring astronauts have to undergo and which journalists write about as if they were nothing out of the ordinary. What sense is there in them? And how is weightlessness simulated? The only technique imaginable would be to close the candidates in a vehicle in free-fall: a plane or an elevator such as Einstein postulated for the experiment designed to illustrate the concept of special relativity. But a plane, even in a vertical fall, is braked by the resistance of the air, and a lift (or rather, a fall) has additional frictional forces acting on the cable. In both cases, weightlessness (or abaria to the die-hard classicists) would not be complete. And even in the best case – the quite terrifying scenario of a plane dropping like a stone from a height of five or ten or twenty miles, perhaps with an additional thrust from the engines in the final stages – the whole thing would last no more than a few tens of seconds: not enough time for any training or for measuring physiological data. And then there would be the question of stopping . . .

And yet almost all of us have experienced a ‘simulation’ of this decidedly non-terrestrial sensation. We have felt it in a childhood dream. In the most typical version, the dreamer becomes aware with joyous amazement that flying is as easy as walking or swimming. How could you have been so stupid as not to have thought of it before? You just scull with the palms of your hands and – hey presto – you take off from the floor, moving effortlessly; you turn around, avoiding the obstacles; you pass skilfully through doors and windows, and escape into the open air: not with the frenetic whirring of a sparrow’s wings, not with the voracious, stridulant haste of a swallow, but with the silent majesty of the eagles and the clouds. Where does this presentiment of what is now a concrete reality come from? Perhaps it is a memory common to the species, inherited from our proto-bird-like aquatic reptiles. Or maybe this dream is a prelude to a future, as yet unclear, in which the umbilical cord which calls us back to mother earth will be superfluous and transparent: the advent of a new mode of locomotion, more noble even than our own complicated, unsteady, two-legged style with its internal inefficiencies and its need of external friction between the feet and the ground.

From this persistent dream of weightlessness, my mind returns to a well-known rendition of the Geryon episode in the seventeenth canto of the Inferno. The ‘wild beast’, reconstructed by Dante from classical sources and also from word-of-mouth accounts of the medieval bestiaries, is imaginary and at the same time splendidly real. It eludes the burden of weight. Waiting for its two strange passengers, only one of whom is subject to the laws of gravity, the wild beast rests on the bank with its forelegs, but its deadly tail floats ‘in the void’ like the stern-end of a Zeppelin moored to its pylon. At first, Dante was frightened by the creature, but then that magical descent to Malebolge captured the attention of the poet-scientist, paradoxically absorbed in the naturalistic study of his fictional beast whose monstrous and symbolic form he describes with precision. The brief description of the journey on the back of the beast is singularly accurate, down to the details as confirmed by the pilots of modern hang-gliders: the silent, gliding flight, where the passenger’s perception of speed is not informed by the rhythm or the noise of the wings but only by the sensation of the air which is ‘on their face and from below’. Perhaps Dante, too, was reproducing here unconsciously the universal dream of weightless flight, to which psychoanalysts attribute problematical and immodest significance.

The ease with which man adapts to weightlessness is a fascinating mystery. Considering that for many people travel by sea or even by car can cause bouts of nausea, one can’t help feeling perplexed. During month-long spells in space the astronauts complained only of passing discomforts, and doctors who examined them afterwards discovered a light decalcification of the bones and a transitory atrophy of the heart muscles: the same effects, in other words, produced by a period of confinement to bed. Yet nothing in our long history of evolution could have prepared us for a condition as unnatural as non-gravity.

Thus we have vast and unforeseen margins of safety: the visionary idea of humanity migrating from star to star on vessels with huge sails driven by stellar light might have limits, but not that of weightlessness: our poor body, so vulnerable to swords, to guns and to viruses, is space-proof.

In this rare New York appearance, Ernesto Ferrero, longtime editor of Levi’s work, offers new insight into Levi’s intellectual and moral concerns. “Is this a man? The German, the good…