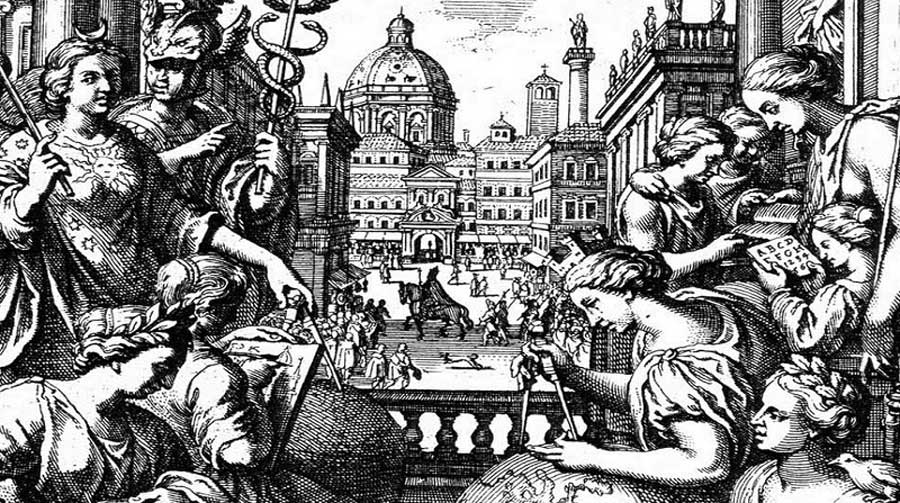 Until recently, Abramo Colorni (ca. 1544-99) has been flying largely under the radar of historians, even having eluded detection by the editors of the Encyclopaedia Judaica. Building on the research of very few precursors (notably, Ariel Toaff’s Il prestigiatore di Dio: Avventure e miracoli di un alchimista ebreo nelle corti del Rinascimento [2010]), Daniel Jütte has now reconstructed the “spectacular career” of an early modern Jewish engineer and munitions manufacturer (p. 235). Colorni’s interests and abilities were multifaceted, encompassing those of “court engineer, mathematician, chiromancer, alchemist, weapons and powder manufacturer, cryptologist, magus, [and] dealer in luxury goods” (p. 5). He was especially well versed in the technology of warfare. He designed harquebuses (one of which could be fired repeatedly without reloading); proposed a method for wide-scale poisoning; devised scaffolding for scaling fortresses; and, most important, constructed and operated saltpeter-producing landfills in Mantua, Prague, Ferrara, and Stuttgart. (Saltpeter, or potassium nitrate, is the critical component of gunpowder.) He was also reputed to have expertise in the art of prison escape and composed a book on cryptography (with special relevance for military communications). His other books were on mathematics and chiromancy. Though now largely unknown, Colorni was celebrated in his time, most enthusiastically by the priest (and his friend) Tomaso Garzoni in his La piazza universale di tutte le professioni del mondo (second edition, 1587).

Colorni became a technical expert and purveyor of exotic wares (including, for example, jewels, antiquities, and unicorn powder) at four major European courts: Ferrara (Duke Alfonso II d’Este), Mantua (Duke Vicenzo I Gonzaga), Prague (Emperor Rudolf II), and Stuttgart (Duke Friedrich I of Württemberg). It is also known that he lived for a while in Florence, where he got embroiled in a dispute with a certain Rabbi Giuseppe Ursi over the construction of a mikveh. Before this controversy was over, he accused the rabbi of sodomy and incest, calumnies that resulted in Colorni’s banishment from Florence. After Colorni worked successfully in the courts of Ferrara and Mantua, including as official “court engineer” in Ferrara, Duke Alonso “loaned him out” in 1588 to work for Rudolf II. The emperor was initially interested in having Colorni develop an escape plan for the imprisoned Archduke Maximilian, held in Swedish custody. When diplomacy made that strategy unnecessary, Colorni joined the menagerie of engineers, scientists, and alchemists in Prague and ultimately distinguished himself by constructing and operating a large saltpeter-producing facility.

In 1597, having left Prague, he negotiated a quasi-monopoly for production of saltpeter in Ferrara. It is not known if he was able to implement these plans before the duke died later during that same year, although it is known that Colorni’s son, Simone, produced saltpeter there subsequently. In any event, in 1597 he set up operations for another large-scale saltpeter facility in Stuttgart for the Duchy of Württemberg. Colorni encountered an extremely hostile anti-Jewish environment in Protestant Stuttgart. Whereas all of his earlier residences had been in leading centers for Jewish life, Stuttgart and the entire Duchy of Württemberg tolerated no Jewish residents.

The new duke, Friedrich I, was interested in the economic and technological successes of court Jews (and Jewish experts) in some places and wished to benefit from Colorni’s military technology; Friedrich also tried—unsuccessfully—to settle a Jewish trading company in Stuttgart, apparently with Colorni’s assistance. Although Colorni was able to begin saltpeter production successfully, Friedrich’s efforts encountered fierce opposition from the Württemberg Landtag, which insisted on the strict banishment of every single Jew from the duchy. Jütte is not able to reconstruct all details, but this phase of Colorni’s life ended with his surreptitious (and illegal) departure from Stuttgart in March 1599. He was said to have absconded with the immense sum of four thousand gulden. Efforts to extradite him to Württemberg for trial were blocked by the protective court of Mantua; interestingly, after Colorni’s death on November 15, 1599, the Stuttgart court attempted to extradite his son, Simone, also without success. This episode warrants even closer study as a failed attempt in a German Protestant court to modernize Jewish policy in the interest of military and mercantilist advancement and also as an example of an Italian court protecting Jewish interests.

Jütte has framed his fascinating research as a case study for a larger history of an “economy of secrets.” This innovative approach is in some respects a form of mentality history and in other respects an argument that in early modern Europe a distinct economic sector of secrecy existed, formed by a general practice of trading in a broad array of types of secrets. As he persuasively argues, stereotypes emerged that attributed special competence in the “economy of secrets” to Jews. Moreover, the mentality of secrecy and this form of economic exchange were prominent among Christians as well, and became important contexts for Christian-Jewish interaction.

Thus, despite its sharp focus, the study reflects on a broad array of issues: it “attempts to proceed from Jewish history to a general praxeology of secrecy in the premodern era” (p. 8). To that end, Jütte defines types of secrecy (alchemy, medical arcana, cryptography, political-military reconnaissance, military and civilian technology, and trade in legendary unicorn horns) in chapter 2, a questionable aspect of which is Jütte’s exclusion of theological secrecy, especially Kabbalistic knowledge as well as the widespread phenomenon of secret societies. This is followed by a special focus on the complex political and economic meaning of magic in chapter 3, and a brief assessment of the actual trade in secrets in chapter 4. The heart of the study is the extensive analysis of Colorni (chapter 5) as an exemplar of the knowledge economy (which constitutes well over one-third of the book). The organization is not entirely successful for it results in an unusual amount of repetition, as nearly everything stated about Colorni in chapters 1-4 is repeated in the comprehensive presentation of his career in chapter 5.

Jütte has meticulously reconstructed Colorni’s life to reveal a significant variant of a familiar type in early modern historiography: a Jew working confidentially and with great expertise at very high levels of government (overwhelmingly at imperial or territorial courts) in a variety of endeavors often related to provisioning. Colorni’s special competence in military technology is a precursor of what would very soon become the “core business” of some of the most successful central European court Jews in the seventeenth century (p. 191). Apparently, Colorni never had the financial resources to rise to the level of a leading court Jew (in other words, to reach the level of what we currently mean by the designation “court Jew”), but he flourished at European courts because of his technical know-how and ability to scale up saltpeter production. Therefore, in most respects, he fits a traditional narrative of the successful Jew at court, although one curious feature of Colorni’s life, perhaps underappreciated by Jütte, is the relative lack of evidence we have for his participation in Jewish society on a significant level.

We may also wish to question whether or not the “economy of secrets,” as a historiographic concept, is just another way of labeling what we already know: the special circumstance at this time of confidential governmental work at authoritarian courts. As Jütte concedes, Colorni is part of a small group of experts (Christian and Jewish) who merely wanted courts and other affluent patrons to buy their technology (see p. 234). Of course, in the sixteenth and seventeenth centuries, this technology (as in the case of Colorni) included elements of engineering, medicine, alchemy, and magic. Nonetheless, Jütte wrestles in truly innovative ways with some very challenging issues, in particular by endeavoring to define an overarching socioeconomic mentality that embraces successful engineering and magical performances, chemical production and alchemical experimentation (and mysticism), and the seeming ubiquity of magic (or beliefs in magic) in the historical context of the development of the scientific revolution. His presentation of Colorni in this context is both rich and persuasive: Colorni’s “magic was inseparable from his aspiration to a status of a scientia” and “Colorni was capable, in a figurative sense, of speaking several languages—including those of the engineer, the magus, and the courtier” (pp. 220, 221).

Alessandro Cassin in conversation with Roberto Levi “Compassion and brutality can coexist in the same individual and in the same moment, despite all logic; and for all that, compassion eludes…