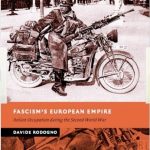 A controversial reappraisal of the Italian occupation of the Mediterranean during the Second World War which Davide Rodogno examines for the first time within the framework of fascist imperial ambitions. He focuses on the European territories annexed and occupied by Italy between 1940 and 1943: metropolitan France, Corsica, Slovenia, Croatia, Dalmatia, Montenegro, Albania, Kosovo, Western Macedonia, and mainland and insular Greece. He explores Italy’s plans for Mediterranean expansion, its relationship with Germany, economic exploitation, the forced ‘Italianisation’ of the annexed territories, collaboration, repression, and Italian policies towards refugees and Jews. He also compares Fascist Italy and Nazi Germany through their dreams of imperial conquest, the role of racism and anti-Semitism, and the ‘fascistization’ of the Italian Army. Based on largely unpublished sources, this is a groundbreaking contribution to genocide, resistance, war crimes and occupation studies as well as to the history of the Second World War more generally.

“Rodogno intends the book as a ‘point of departure’ with a discussion of themes that should ‘be deepened’ (p. 416). This is too modest a claim for such a superb book. The author’s detailed analysis and skillfully interweaving of material on Fascist occupation set a high standard. Contributing much to our knowledge and understanding of Italian Fascism, the book is certain to stimulate further comparative study of occupation policy.”
– Maura E. Hametz, Old Dominon University

“It is refreshing when a quality study with new perspectives is published.”
-LTC Michael A. Boden, Military Review

“Rodogno has written an exceptional work which has now been professionally translated. Effectially, Rodogno has widened the historiography of the war and brought a new perspective to bear on axis conquest, occupation, and racism…David Rodogno should be congratulated for this excellent book. Facism’s European Empire sheds light on a vague and largely misunderstood aspect of Second World War history. It should be essential reading for all students of modern European history.”
-Philip Blood, Canadian Journal of History

“Rodogno relates this disturbing story exceptionally well. His research is first-rate. He has worked assiduously in Italian archives and provided comprehensive and compelling findings. He is careful with the resulting evidence, clearly understanding its importance but also its limits. His explanation is meticulously organized and presesent, and nonspecialists will be able to follow the chain of argument easily.” -G. Bruce Strang, The Historian

“…deserves thorough discussion on both sides of the Atlantic…Rodogno has succeeded in producing a persuasive and novel analysis of this contentious topic. The book is an eloquent narrative history that will no doubt interest scholars across disciplines as it promises to reinvigorate scholarship on Fascist Italy, the Holocaust, and the wartime experience in Mediterranean Europe.” –Emily Greble Balic, Harvard University: Journal of Interdisciplinary History

After Mussolini: Jewish Life and Jewish Memories in Post-Fascist Italy. In 1922, in a Vienna where anti-Jewish sentiments were intense and exploited by various political movement, the Austrian-Jewish writer Hugo…