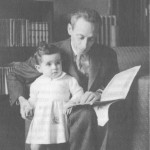 Renzo Segre
Image: Renzo Segre and his daughter. Renzo Segre, Venti Mesi, is published by Sellerio, Palermo, 1995 Renzo Segre (1909-1973), had a degree in economics. He had a position in the public administration when, in 1938, the Racial Laws stripped him of his job.

As it often happened in the past,  among this year’s initiatives to commemorate Yom Hashoah, there is little mention of the persecution carried out against Jews in Italy.
The long held view, particularly from outside Italy, is that Fascist Italy did not kill or deport Jews until the autumn of 1943, when the center and north of the country were invaded by the Nazis, the true perpetrators. This fits well in a narrative which portrays Mussolini’s regime as an “operetta dictatorship”, unable to implement any of its proclaimed intents, and Italy as a country where anti-Semitism had been negligible or absent until 1938.

Following Michele Sarfatti’s seminal The Jews in Mussolini’s Italy: From Equality to Persecution, in the last 15 years, historians have convincingly demonstrated this narrative to be deeply flawed.

Between September 8th 1943 and May 8th 1945, a substantial portion of the Italian territory governed by the RSI  (Italian Social Republic), allied with the Nazis, implemented brutal policies against the local population and was instrumental in the arrests and deportations of the Jews. Over 50% of the Jews arrested in Italy and deported to extermination camps were arrested by Italian soldiers and police who handed them to the Nazis. The RSI even had an Italian SS corps, which pledged allegiance directly to Hitler.

A variety of reasons have allowed some to ignore or minimize Italy’s part in the Shoah, ranging from the high Jewish survival rate compared to other countries, also the survival of several thousand “foreign Jews” interned by Mussolini in the south and liberated by the Allies, as well as a plethora personal memoirs.

The weight of memoirs poses specific problems in establishing historical truths.
The many memoirs of Italian Jews who survived thanks to the help of fellow Italians can cast a misleading light. In reading them one must keep in mind that most of the people swallowed up in the Shoah did not leave memoirs, while those who survived often did. And more importantly, each memoir only addresses the specific set of circumstances lived by the narrator and his or her immediate family and circle.

For those who have formed a consolatory picture through the memoirs of Jews who survived in Italy, Renzo Segre’s Twenty Months, brings a rare view of the other side of the coin. Renzo Segre and his wife Nella survived the darkest years of Jewish persecution, 1943-45, by hiding for twenty months in a psychiatric ward.

Renzo pretended to be mentally ill and underwent an extensive pharmacological treatment, as well as electroshock therapy.  Seven years after the Racial Laws had demoted them to second-class citizens, after the the Armistice of September 1943 the Segres faced the manhunt that had been unleashed against the Jews. Inside the clinic they lived in daily terror of being discovered as Jews, while separated from all their loved ones, deprived of their home and their professions.

Mr. Segre’s memoir, which recounts the almost two years in a psychiatric clinic of a provincial town in Piedmont, is a dramatic window not only into the daily lives of Jews in hiding, but also the overall brutality of life under the Italian Social Republic. For those keeping an accounting of Jewish deaths during the Shoah in Italy, Segre’s account is a keen reminder of what some of those who survived actually lost. For the Segres, the months spent in terror inside the psychiatric clinic were the culmination of seven years of progressive losses and deprivations.

Fast paced and razor sharp in the description of events, atmosphere and the author’s psychological state, the memoir has a gripping, almost cinematographic quality.

There is one guest missing: R., a republican fascist, is out participating in Solaro’s action.

I believe I will remember this scene forever, in its most minute details, the way I see it now: I’m about to swallow a piece of stew, when a deafening gunshot burst lets us know that the so-called justice has been carried out; a female howl follows, heart-rending, like a wounded beast; soon enough I will find out it is the wife of one of murdered ones, who witnessed the tragedy from her window. With a knot in my throat I drop the fork, an irrepressible need to cry welling up, thinking of our kind Sante and all those others who are no longer. At that very moment R. returns, and we have to get a hold of ourselves, resume eating, because it’s not even allowed to be overcome with emotion for the victims of fascism, under penalty of following their fate.

But I cannot swallow, it feels like I am chewing human flesh. Nella’s tears are dripping onto the plate in front of her.

We finish this accursed meal as fast as we can, and move to another room.

Three little kids, between two and six years old, are sitting here, mute and cowed, together in one single armchair. Sante’s children. They don’t know anything, but unconsciously they are fearful: some relatives have taken them away from their home, ransacked by the fascists, and brought them to this strange environment, tearing them away from their sobbing mother.

My heart cringes at the sight of these little ones, already horribly deprived of their kind father; together with Nella we attempt to distract them, while waiting for more definite news from outside.

Finally here are the news: the murdered ones are the municipal clerk, the café owner and the mailman: three of the best people in town.

My friend, pardoned at the very last moment, as he was approaching the firing squad, returns to the clinic: he is propped up by his wife, because of the savage beating he suffered, but also because, although a man of exceptionally robust constitution, he can barely stand after the humiliation of his ordeal.

He barely manages to swallow the cup of broth we offer him.
In the meantime, subsequent horrible details keep coming.

Although the victims did receive the coup de grâce, a shot to the back of the head, the town’s clerk didn’t die right away, and half an hour later he continues to grope weakly, lying in the blood of his fellows in misfortune. A medical intervention could help him, or at least put an end to his suffering, which must be atrocious.

But certain sinister looking characters who keep guard over the victims prohibit anybody to come close, stating that, corpses or not, they cannot be removed, they have to be left in place, as an example of… Fascist justice.

For a Memory Culture Beyond Victims and Perpetrators