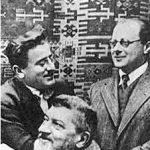 An intellectual biography of the antifascist Carlo Rosselli.
by Alexander Stille (The New York Times)

Carlo Rosselli — one of the most courageous and interesting figures of Italian antifascism — is a rich and overdue subject for a biography. Arrested in Italy in 1926 for underground activities, Rosselli escaped to France and founded Giustizia e Libert (Justice and Liberty), the principal Italian non-Marxist antifascist movement.

He was among the first to grasp the importance of the Spanish Civil War as a means of organizing resistance to fascism across Europe. He recruited and led troops that fought alongside the Spanish loyalist forces and made broadcasts from Barcelona to Italy that probably sealed his fate. One fascist spy reported to his handlers in Rome that ”the greatest danger comes from Rosselli, and, in my view, it is absolutely necessary that he be suppressed.” In the spring of 1937, he and his brother were murdered by fascist gunmen.

”The assassination of the Rosselli brothers signals the death of liberty in Europe,” declared a protest signed by artists and intellectuals in France, including Andre Breton, Pablo Picasso and Fernand Leger. Their deaths also served as the inspiration for Alberto Moravia (a cousin) in his novel ”The Conformist,” which was later made into a film by Bernardo Bertolucci.

Although much was written about Rosselli after his death and in the immediate postwar period, his star dimmed for many years because his attempt to create what he called ”liberal socialism” did not fit into the polarized dynamic of the cold war period.

‘
Stanislao G. Pugliese’s ”Carlo Rosselli” comes at a propitious moment, in which Rosselli and Justice and Liberty are coming back into vogue. With the end of the cold war, Rosselli’s efforts to meld the push toward social justice with respect for democratic liberties suddenly look remarkably germane.

Rosselli was born in 1899 into a wealthy and distinguished family of Tuscan Jews, and, like many Italian Jews, his ancestors were enthusiastic supporters of the Risorgimento, Italy’s quest for national unity. Rosselli came of age during the rise of Mussolini, who seized power in 1922. In the early 1920’s, he founded an antifascist cultural circle in Florence, and after open political dissent was formally suppressed he began a clandestine publication, Non Mollare! (Don’t Give Up!).

Pugliese, a historian at Hofstra University, has chosen to write primarily an intellectual biography and has done a commendable job of explaining Rosselli’s maverick position within European Socialism. While this is an entirely respectable choice, the book at times seems concerned with the academic aim of situating Rosselli within the bibliography of European radical political thought rather than reanimating Rosselli and his world.

This is somewhat unfortunate, since Rosselli was refreshingly non-ideological and placed great emphasis on the need for action. In 1926, he helped arrange the escape from Italy of the elderly Socialist leader Filippo Turati, for which he was placed on trial and convicted. Exiled to the Sicilian island of Lipari, he organized a daring escape, fleeing by motorboat to North Africa and then to Paris.

By all accounts, Rosselli had a large, magnetic personality, a generous, impetuous nature and was a lively and tireless talker with a great gift of winning others over to his views. At times his openness and impetuosity bordered on the reckless: he rented planes to drop leaflets over Italy and discussed assassination attempts against Mussolini. Yet Rosselli’s personal daring was tempered by considerable moderation and flexibility in his theoretical views. ”For Rosselli,” Pugliese writes, ”the task of Justice and Liberty was nothing less than reconciling the political and social potential of the Russian Revolution with the scientific, humanistic, liberal legacy of the West.”

Rosselli insisted that he was a Socialist but not a Marxist. The orthodox Marxists, he felt, emphasized justice at the expense of freedom. ”What I disdain is every form of collective life in which the humanity of each person is annulled,” he wrote in reference to the Soviet Union. Justice and Liberty was extremely nonsectarian because it believed in the importance of uniting all possible forces in defeating fascism. Rosselli invited Leon Trotsky to contribute to Justice and Liberty’s newspaper, but Trotsky refused because of Rosselli’s bourgeois democratic views.

Rosselli promoted ”liberal socialism” because, he said, Socialism was ”the logical development, taken to its extreme consequences, of the principle of liberty.” ”Socialism,” he also remarked, ”means that liberty comes into the life of poor people.”

As one who stressed the importance of free will and of the individual, Rosselli saw the necessity of actively combating fascism in Europe rather than passively relying on the laws of history. After the rise of Hitler, Rosselli perceived that war was coming, and he considered the victory of democracy far from inevitable. And though he called for the unification of all antifascist groups, the Communists, following the orders of Moscow, denounced him as a ”social fascist.”

When Franco — with the help of Hitler and Mussolini — tried to overthrow the left-leaning Spanish Republic, Rosselli immediately saw a fundamental opportunity for European democracy to stand up to the increasingly powerful and aggressive forces of fascism. Echoing the famous Jewish prayer of the Passover seder, he coined the slogan ”Today in Spain, tomorrow in Italy.” His ability at rallying young Italians to the loyalist cause in Spain frightened the Mussolini regime into having him and his brother murdered, and it is no exaggeration to say that those murders represented one of the low points in the battle against fascism on the eve of World War II.

Alexander Stille is the author of ”Benevolence and Betrayal: Five Italian Jewish Families Under Fascism.