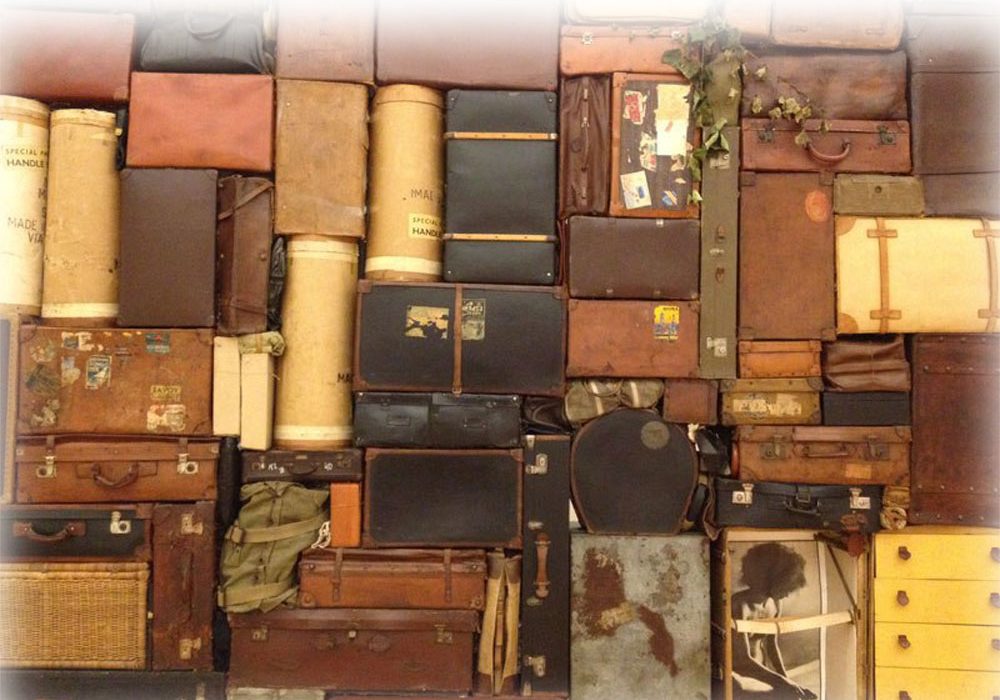 Periodic Words is curated by Anna Basevi and draws on Levi’s penchant for games—particularly words games— and from his singular curiosity for words’ usage and their genealogy.

Basevi imagines reading Primo Levi’s work through the lens of specific words taken from a vast range of semantic families. She identifies occurrences of a given word throughout the writer’s lifelong production, thus outlining the way in which those words recur and change over a period of forty years.

The result is a fragmented reading map with random entry points, each opening onto different places in Levi’s writings.

If, on one side, the artisanal labor of compilation reminds of Elia Levita’s biblical concordances, on the other, the adventitious choice of entries, stems from a poetic and philosophical approach to the notion of chance as essential part of the human experience.

Anna Basevi is an independent scholar of Italian literature and a teacher of Italian in Rio de Janeiro, Brasil where she has lived for over 20 years. She obtained a doctorate in Literature from the Federal University of Rio de Janeiro with a dissertation on the concept of “stranger” in Primo Levi’s work.

She is currently the recipient of a fellowship from at FAPERJ to continue her doctoral research. A version of this text has been published in Doppiozero: www.doppiozero.it

In the Preface to If This Is A Man, Levi warns the reader about some possible consequences of organized political systems: “Many people—many nations—, can find themselves believing, more or less consciously, that ‘every stranger is an enemy’. For the most part this conviction lies buried in the mind like some latent infection; it betrays itself only in random, disconnected acts, and is not the basis of a system of thought. When this happens, when the unspoken dogma becomes the main premise in a syllogism, then, at the end of the chain, stands the Lager.”

Regarding the racial laws of 1938, Levi comments: “not a day passed that the newspapers and magazines defined us “extraneous to the tradition of the country, different, harmful, abject, enemies.” Exclusion induces him to derive from the chemical laboratory a praise of impurity as an intrinsic trait of vital motion (“Zinc,” Periodic Table).

Classified by the anti-Semitic laws as “foreigner” in Italy, in Auschwitz Levi cannot identify with Yiddish-speaking Jews. In the babel of the Lager rendered through the multilingual text, recognition is accentuated through one’s own language. Italians are the first to succumb to their inability to understand orders. Levi however, breaks the curtain of incommunicability and, determined to expand his “limited wortschatz,” he learns, among others, some threateningly foreign words like Wstavać or the hybrid seleckja. In an environment dominated by German, Polish, Yiddish, Russian, and Hungarian, prisoners find themselves thrown into a babel of “infinite and meaningless” codes. This radical condition of “foreignness” does not spare even native German speakers, struck by the extraneous sound of the Nazi language (as it happened to Jean Améry and Victor Klemperer).

Since his first writings, Levi was intrigued by the semantic field of the word “barbarian” and its original meaning of “crude and indistinct “ber-bar” (mumbling), animalistic mumbling” inherent to linguistic diversity. However, barbarism par excellence is that of the Nazi’s, already described in the scene of the arrival at the camp reminiscent of Dante’s Inferno: “the darkness echoed with outlandish orders in that barbaric barking of Germans in commands, which seem to  give vent to a centuries-old rage” (If This Is a Man).

Barbarism appears in Levi’s analysis of the dynamics of oppression in technological societies: the “silver Martian fur” shown off by one of the characters of “Sleeping Beauty in the Fridge” (Natural Histories) subtly alludes to an imagined violent colonization of Mars.

In “Translating and Being Tanslated” (Other People’s Trade), Levi reiterates that “for many people, those who speak another language are, by definition, foreigners, strangers, ‘strange’, different from me, and the different is a potential enemy, or at least a barbarian: that is, etymologically, a stutterer, one who cannot speak, a quasi non-man”.

The “relative” meaning of linguistic barbarism is extended to the “absolute” one, that the stranger is the enemy and can thus be eliminated. Indeed, Hitler’s project of excluding human beings from their own “species” pushes non-belonging to the limit.  It  enables the tragic conditions of being an “integral” foreigner, one who corresponds to the “drowned.” Integral foreigners are “integral witnesses,” like the Muselmänner or little Hurbinek; they have no language and are confined by barbed wire.

Levi’s stranger branches off, punctuating his entire opera with typological variants that, at times, overlap: from the explorer to the polyglot, the prisoner of the Lager, the exile. From the survivor to the wandering Jew, the barbaric enemy, the SS officer. From the translator to the narrator and all the way to the alien of his fantastic stories. The Germans are themselves foreigners, whom Levi struggles to understand and to whom he often turns as readers as if in an ongoing correspondence with them.

In spite of reaffirming, with a touch of positivism, that hostility towards strangers is a human ancestral trait, Levi displays constant curiosity towards otherness and the world. He also endows many of his character with the same attitude. In “Lead,” (Periodic Table) and “Westward” (Flaw of Form) explorers and imaginary peoples contemplate one another in benevolent awe.

Many of the foreigners of the war period stories are not at all barbarous-enemies: Schlome, the empathetic young man at Auschwitz, who welcomes him “on the threshold of the house of the dead” (If This is a Man); the Hungarian Bandi in “The disciple” (Lilith ); the gypsy of the homonymous tale (Lilith); the Alsatian friend Jean called “Pikolo” (If This is a Man); fellow travelers like Elias, “disconcerting spectacle” with whom the narrator feels “so different, and so foreign” (The Truce); Olga, a Croatian anti-fascist, who, before the war,  along with thousands of foreign Jews, paradoxically found refuge “in officially an anti-Semitic Italy.” (The Truce); Avrom, who “like so many remote northern travelers had discovered Italy with a virgin eye, and had fought for the freedom of all in a country that was not his” (Lilith). A polyglot, Avrom emigrated to Palestine and forgot his own language. To the same token, others observe Italians with marvel: the Poles look at Cesare, a man from Rome, as “the preposterous foreigner who had come from the ends of the earth” (The Truce); and the Jewish partisans of If Not Now When? are fascinated by the “strange country” in which friendliness and deceit live side by side.

In war-ravaged Europe, Levi seem to model his idea of foreigner on Ulysses and his quest to know the world and the others. Like Ulysses, the stranger is the one who tells the story. The one who narrates adventures and traumatic experiences is modeled after both Homer’s hero and Coleridge’s Old Mariner.

In Levi’s texts, foreigners alternatively move in a totalitarian reality that casts them as enemies, or are, even if initially subject to suspicion, surrounded by an aura of what Paul Ricoeur defined as sympathy.

Numerous are the descriptions of foreign sounds, landscapes of exile and clashes between different cultures. Differences stand out in what Alberto Cavaglion calls “the long transversal survey of national characters” that casts in front of each other the Mediterranean and Nordic cultures, worldly Italian Jews and Yiddish-speaking Jews. In this intimate observation of strangeness, Levi suggests that, whereas “eradicating a prejudice is as painful as extracting a nerve” (If Not Now When?), the crossing of borders and the encounter with others enables a continuous redefinition of oneself and the other.

At the same time, the idea of the internal stranger intersects with that of the double: the Doppelgänger, “a dumb and faceless brother, who is co-responsible for our actions” (“On Obscure Writing,” Other People’s Trades), the unheimlich in the translation of Kafka’s Trial, the centaur and the “split” exemplified in expressions such as “non-Jewish Jew” and “writer-non-writer,” that recur in his work and point further to the multiple layers of the notion of foreigner.

Finally, the universe itself “becomes increasingly intricate, unexpected, violent and strange” (“News from the sky”, Other People’s Trades) and human beings, burdened with cosmic solitude and scientific data on exorbitant dimensions and distances, increasingly become themselves “strangers”.

Memory Buried: In Search of Mussolini’s Camps   Interview by Alessandro Cassin Carlo Spartaco Capogreco is a professor at the Università della Calabria and president of Fondazione Ferramonti, which is…