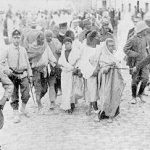 Recent historiography has persuasively demonstrated that the anti-Jewish racial laws of 1938 were not Mussolini’s concession to Hitler, but instead the culmination of Italy’s own racist policies. These policies began in the 1920’s, during the bloody “pacification” of Libya, escalating with the 1935-36 conquest of Ethiopia and culminating with the racial laws of 1938, later brought to their most violent manifestation by the Italian Social Republic in 1943. The one person that can be said to embody the entire spectrum of Italian racist policies – from Libya to the Italian Social Republic – was General Rodolfo Graziani, Marquis of Neghelli.

Graziani distinguished himself in the 1920’s by suppressing the Senussi rebellion in Libya, earning the nickname of ”The Butcher Of Fezzan”. He was responsible for the planning of internment camps for Libyan rebels, later used by the Nazi-Fascists as models for concentration camps in Europe. Graziani’s use of nerve gas against the civilian population in Ethiopia is well documented. After the fall of Mussolini Graziani served as general in the die-hard Fascist Italian Social Republic. In 1948 the United Nation War Crimes Commission named Graziani as one of the Italians officers to be tried for war crimes.

This August, Graziani’s hometown decided to celebrate him, causing a scandal in Italy and abroad (NYT). Is the honoring of General Graziani an unfortunate isolated incident or is it one of the events that periodically signal the continued ambiguity  of both Italian public opinion and justice system with regard  to the Fascist past?

Italy’s equivalent of the Nuremberg trials was planed but never held and the few Fascist officers who were tried and sentenced, never served a day in prison. The 1947 amnesty facilitated national amnesia. The Fascist leadership was largely reintegrated into the new democracy.

In 1995, 50 years after the end of the war, Francesco Rutelli, then Mayor of Rome, proposed to dedicate a street to Giuseppe Bottai, a Fascist Minister, who had been a violent Blackshirt militia leader, governor of Ethiopia during the colonial massacres and among the promoters of the Racial Laws against the Jews. Protest coming primarily but not only from the Italian Jewish Community, put an end to the initiative.

In recent years, “Fifty Italians”, a bizarre documentary celebrating Italian fascist diplomats and members of the military who had allegedly rescued Jews, was promoted throughout the US with the support of the Italian diplomacy. One of the heroes of the film is General Mario Roatta, known as the “Black Beast” of Yugoslavia. After the war General Roatta was sentenced for war crimes. As the head of Mussolini’s Secret Services, he masterminded the murder of Carlo and Nello Rosselli and the massacre of Yugoslavian partisans and civilians, including women and children. Mario Roatta received a life sentence in 1945, but managed to vanish into oblivion in Franco’s Spain, via Vatican City.

Neither Rodolfo Graziani, Mario Roatta, or Junio Valerio Borghese (a military commander during the RSI who in 1970 attempted a coup d’etat intending to install a neo-Fascist regime) and none of the other Italian military men, policemen and diplomats who had been indicted for war crimes, served more than a fraction of their sentences, it they served any time at all.

Last January, the Mayor of Rome Gianni Allemanno, proposed to dedicate a street to Giorgio Almirante, editor of the fascist journal “The Defense of the Race”. The proposal raised a violent controversy, mainly led by the Jewish Community of Rome and the National Resistance Association. The recent tribute to General Rodolfo Graziani prompted national protests as well as international attention.

Will a larger international forum help Italy come to terms with the memory of crimes committed under the Fascist dictatorship?

This village in the rolling hills east of Rome is known for its fresh air, olive oil and wine — and its residual appreciation of Benito Mussolini, whose image adorns some wine bottles on prominent display in local bars.

This month, the town’s fascist sympathies became the subject of intense debate when its mayor unveiled a publicly financed memorial to one of its most controversial former citizens: Rodolfo Graziani, a general under Mussolini who was accused of war crimes at the end of World War II and earned the title of “the Butcher” in two campaigns during Italy’s colonization of North Africa in the 1920s and ’30s.

The monument, in a style reminiscent of fascist architecture, sits on the town’s highest hill, with the Italian flag flying from the top and inscriptions reading “Honor” and “Homeland.” Inside sits an austere marble bust of General Graziani, surrounded by original copies of the front pages of the newspapers from the day of his death in 1955, a plaque from a street once dedicated to him here and a list of his deeds and honors. Read

Fascist Italy and the Jews

Dr. Iael Nidam-Orvieto, the Editor-in-Chief of Yad Vashem Publications discusses the topic of: “Fascist Italy and the Jews: myth versus reality”. This is the first part of this talk, for…