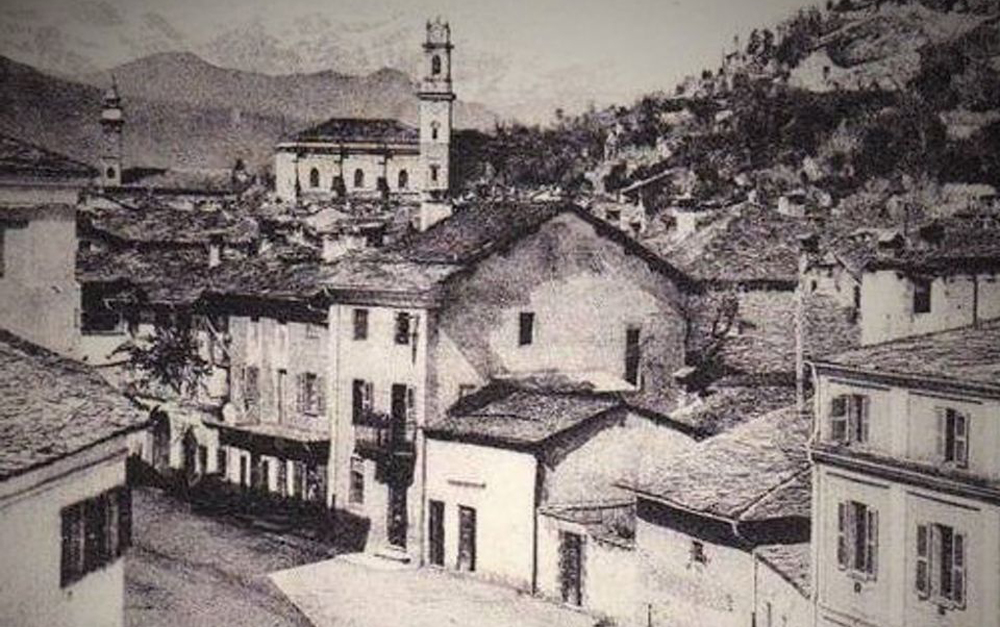 I was born in Caraglio, Cuneo, in September 1908. There I lived with my family and received private education, studying in part with professors from Cuneo during the time of my gymnasium and lyceum before attending the University in Turin in 1925. Among the Jews of my generation, I was one of the few who received a strictly orthodox education. Amadio Momigliano (1844-1924), my grandfather, Donato’s brother had adopted my father, Salomone Riccardo, after the death of my grandfather. To myself and my sister, “Uncle Amadio,” was, of course, our paternal grandfather, and it is as such that I shall speak of him here. Amadio was a modest businessman and landowner, and he remained active as such until the time of his death. He was a man of great piety who also had a strong civic sense. Amadio was exceptional for his house hospitality, his great interest in competence in Hebrew and Aramaic texts beginning with the Bible, as well as for his interest in European social movement. At the age of eighty, the rabbis of Italy (among whom Dario Disegni who had married one of my father’s sister) awarded him a rabbinic diploma honoris causa, which he accepted with pleasure but without saying a word.

Amadio was a special person. Through his continuous study and respect for the Zohar, the medieval mystical text, Amadio had become a reader and friend of the mystic rabbi of Livorno, Elia Benamozegh. He spent the evening of the last years of his life reading the Zohar in Aramaic, but he never would talk about or discuss it, not even, I believe, with the rabbis who came to visit him. I don’t know whether he had ever discussed the Zohar previously with his beloved brother Marco, the famous rabbi of Bologna. The world that was closest to him was not one of praxis but one of theory. He never communicated this, however, either to my father or to me, his beloved nephew. Later in life I tried to find out if there had been a tradition of cabbalistic studies in the family or among close relatives, but there appears have been none.

Our religion was all in the family. We would go to Cuneo (where we kept an apartment for these events) only for Rosh HaShana and for Yom Kippur. This is why I cannot separate my domestic feelings from the everyday religious ceremonies that our families celebrated, and from Shabbat, when everything changed. We would often spend Saturdays afternoons at “Paniale,” a half rustic, half urban dwelling surrounded by field and chestnut groves, which we had bought after measuring the distance an orthodox Jews was permitted to walk away from home on the Shabbat. My real experience with Judaism consists in an intense, austere, domestic piety: children who were blessed by their father on Friday nights; mothers who embraced their husbands and children.

Our orthodoxy was met with great tolerance by the surrounding world. For several years, when we were children my sister and I attended a school run by nuns. We were regularly absent on Saturday and during the official Jewish holidays, and we did not pray with the other children. We still remember Mother Gabriella Testa as the ideal “teacher”.

Our four cousins, who had been born out of a mixed marriage of another of father’s sisters, were as dear to us as any. Above all, the atmosphere for discussion in such an orthodox home was very free. I shall mention the socialist Riccardo Momigliano (who was a congressman and later became a senator), who had little sympathy for Judaism, and Felice, Amadio’s nephew and my father’s first cousin, who was a professor at the Magistero of Rome and died a suicide in 1924.

Felice was deeply Jewish, but he combined Mazzini’s ideas, idealist socialism, and above all the ethical teaching of Jesus separated by redemptive notes. A frequent visitor in our home over a long period of time until 1922, Felice became my second teacher. It was from Felice that I learned about prophetism, Mazzini, and socialism as well as rudiments of Latin and Greek. One may be tempted to smile at the idea of finding me thinking (at the age of eight to ten) about the Deus-Natura of Spinoza as an alternative to the God of the prophets, but there is not reason to smile at the fact that my father, in the last letter I received from him from Switzerland in 1942 (shortly before he was killed by the Nazis together with my mother), recommended that I seek comfort in the prophets and Spinoza. From Attilio Momigliano, a more distant relative, I learned the love for poetry and later became friends with him in every sense.

Around 1928, when Amadio Momigliano was already dead, the intellectual ideas of Arturo Carlo Jemolo, penetrated the family circle. Arturo Carlo Jemolo was the author of a book on Jansenism in Italy in the 18th century which my father had given me for my twentieth birthday. He was a Sicilian Catholic on his father side, but he had a Momigliano grandmother on his mother side (whom he later converted to Christianity). Until the time of his death he remained a devoted and open friend in religious matters; it is from him that I learned much of what I know about Italian Catholicism.

At Caraglio our Judaism was respected. All through he was not actively engaged in politics, “ L cavaier Amadiu” had ties with all the local mutual societies and charities; “l cavaier Riccardo” was mayor of Caraglio between 1917 and the end of the war. For us, Mazzini represented the link between Judaism and the Italian Risorgimento; our patriotism was never questioned.

Except, of course, for my mother, to whom I was very closed, I was less influenced by my mother’s family—a family of industrialists from Turin. Over time I began to appreciate men like my grandfather’s brother Camillo Levi, the eminent organic chemist of the Politecnico of Milan, and my cousins, like the brothers Eugenio Elia and Beppo Levi, both mathematicians. The former died as a volunteer in World War I, while the latter returned to Italy, after an exile in Argentina during World War II, and became a colleague at the Academia dei Lincei. I do not intend to speak here of the Fascist period. My most important thought from the unfortunate years concern non-Jewish friends, like Carlo Dionisotti and Guido Calogero, from whom I never separated. I shall also mention Jewish and non-Jewish friends who died for the freedom of Italy during the Resistenza: one name, that of Leone Ginzburg suffices. This book is dedicated to Primo Levi and Giampiera Arrigoni.

Regardless of what will be written on the period in which Fascist and Nazis collaborated in sending millions of Jews to concentration camps (my father and mother were among the victims), I shall repeat that the great slaughter would never have taken place in Italy, France and Germany (not to say more) had there not been a centuries-old indifference on the part of the people of those countries toward their Jewish fellow citizens. This indifference was the ultimate result of the hostility of the Churches, which viewed “conversions” as the only solution to the “Jewish problem”.