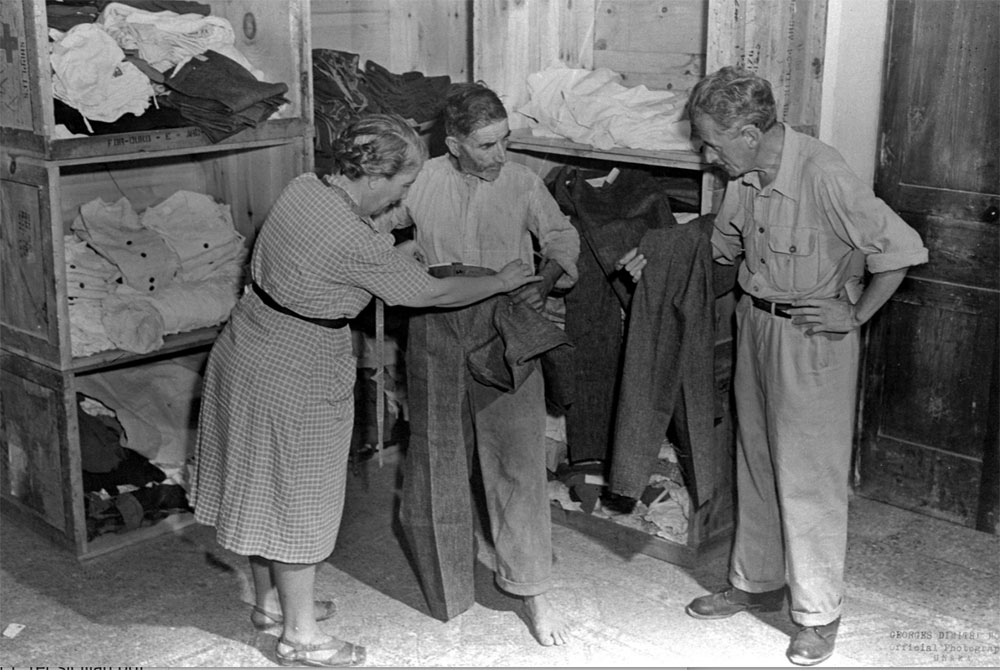 From the UNRRA Archive
A confidential memo from a displaced person in the camp of Tricase (Puglia, Italy), 1946

While browsing the files of the UNRRA archive looking for data on the DP camps at Santa Maria di Leuca, I found this memo that a refugee named Ladislav Lang wrote to the UNRRA coordinator in Rome from Tricase. When I think about men and women in these camps, one of my thoughts goes to the language and how this transient reality was built by exchanges in many languages, some well spoken, some broken, improvised or misunderstood. And about how the layers of these languages affect memory and separate today from that time. I ran my eyes through his words, for the most part well spelled in recently learned English, a mixture of extraordinary ability and moving accent, his demeanor bold and humble of someone who is trying to explain the grief of his companions, and that, beyond any protocol, feeling human depends on being considered worthy of a simple answer. (Natalia Indrimi, Centro Primo Levi)

About the D.P. Camps at Santa Maria di Leuca

I have just read your memorandum of Oct. 30 about the more human handling of refugees. And I take the liberty of writing to you because I see that I have to do with a reasonable and deep- feeling man. The idea is very good and your thoughts were expressed very nicely. You are right in that that the spiritual tensions in the man can be eased by telling someone about them, what is more, I say that such tensions can be eased only by telling about them, what I can say from my own experience, because there are people who close into themselves their anger or mental sufferings to a very long time and it can only be solved, if they tell others about them, what is more, the more people they tell about them, the more they are appeased. And now, let me take the liberty to tell some words about myself. I am the kind of man who walks with open eyes and likes to make observations, to look at the bottom of matters, what is more, to philosophize a little, too. I immediately grasped the opportunity to study people, as I got into various camps. And I can say about myself that today I am a good listener already! Because I not only listen to people’s stories or bitter letters which they read with such pleasure to me, but I also encourage them ( though I myself am in a need of encouragement!) and generally advise them what to do so that the best be mitigated their mental pains. And I do it because now, after the sufferings of the war (and perhaps by the sufferings) there developed a feeling in me that I feel well when I can help others, perhaps because at such times I am glad with them together and forget my own pains.

And now, a little philosophy! I meditated very much about why the Jews whose one of the most characteristic quality is optimism, that infinite optimism and hope that holds them in existence six thousand years already and which helped them after each plague to get up again onto their feet, so why these Jews feel bad now here in the camp, why their optimism cannot prevail here also? I myself spoke to a lot of people, why are you discontented, read news of the outside world and you’ll see that you have at least as good a life as a civilian, having your food, clothes, lodging and quiet; what would you do if you had been born as a poor Italian, now you’d be running about to get a little bread with the ration-card and would pay the high prices of the black-market to get the same foods that you get here, in the camp and would ay the high rents or else constantly tremble not to lose your lodging because you’d be unable to find a new one; about clothing let us not sneak either. There is no entertainments? An Italian has very much!!! Working even the hardest way, his earnings are absorbed almost entirely by the food and lodging; and entirely if he wants to clothe himself and his family. You should look around a little”, say: But they just shrug their shoulders.

At last, I recognized why they are not contented. And the strange i s that just because of their optimism! How? Well , because they always hope that this period-life in camp-is soon over and then comes the good life; so this is only an unpleasant, transitional stage and period and it will be so short that there is no use of feeling like to acquiesce in this life.

But I say that one can only be contented if he acquiesces in his lot and tries to agree with his fate. And I say to them to do this and undertake some work, learn languages and professions, and thereby not only the time runs faster and they temporarily forget their pains, but they do not let the time run by unutilized and prepare themselves to the future, as I read in: an American newspaper that: The future belongs to those who prepare themselves for it; I say it.  So it is very important that people be occupied in some work and now UNRRA at last, recognized this and also, that people are feeling men and they should be handled by, and not be neglected as dogs.

So I suggest that UNRRA make performances to D.p.s first about his own activities (not only to Italians make a propaganda!); and on the other hand try to persuade them not to feel miserious and to keep this life as a sorry transitional period, but to live and work as though this were their civilian life already and learn and prepare themselves to the future, to the “continuation” of this life so that they be able to attain a really better future!

And let me mention one more very important question, what is really very important matter, and that is that we hear no news from the U.S. Consulate! people are everyday coming and asking me: what can be heard about the U.S. Consulate and the emigration to there. We get news from every consulates, only from that of the U.S. no news; and the situation is that the major part of the people here is registered at the U.S. Consulate. So, my suggestion is that the U.S. Consulates should issue at least once in a month are sort for the D.p.s, either by a newspaper or by the Camp-Directors: how matters stand with the visa and which nationalities, when, may hope the reaching of their turn. This would really mean an acquiescence and appeasement to waiting people.

And here I finish. Don’t be angry, Sir, that it is me who wishes to give advice to You, but maybe my observations also can be somewhat useful, regarding that they are taken from my direct touch with these people.

Multimedia artist Cynthia Madansky produced this short film in tribute to Primo Levi as an introduction to the program at the National Book Festival. She used little known archival images…