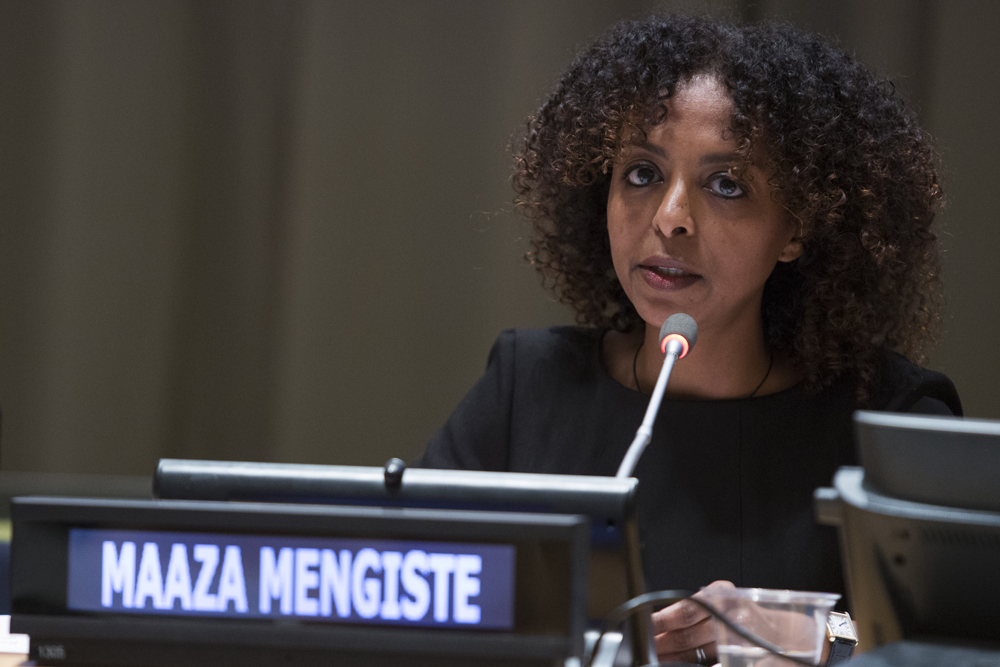 Maaza Mengiste
Maaza Mengiste is a novelist and essayist. Her debut novel, Beneath the Lion’s Gaze, was selected by The Guardian as one of the 10 best contemporary African books and named one of the best books of 2010 by The Christian Science Monitor, Boston Globe and other publications. Her fiction and nonfiction can be found in The New Yorker, Granta, The Guardian, The New York Times, BBC Radio 4, Guernica, and Lettre Internationale, among other places. She is a Fulbright Scholar and was named the 2013 Puterbaugh Fellow, and was awarded Runner-up in the 2011 Dayton Literary Peace Prize. Her second novel, set during the Fascist invasion of Ethiopia in 1935, is forthcoming.

We see the little boy at the same time as we understand the tragedy. He is face down on the beach, dressed in a red shirt and dark blue trousers, his arms oddly aligned at his side. The water laps hungrily at his head, seeping into his nose and mouth before receding back to the Mediterranean Sea. If we didn’t know the facts of his death, it would be easy to convince ourselves that he had simply fallen asleep on the beach.

We paid attention to this photograph of Alan Kurdi, the young boy from Syria who drowned along with his mother and brother in the Mediterranean. It was a poignant reminder of the youngest victims of war and civil strife. The news reports that followed this picture gave us a name. The name connected us to a family, and that family spoke of what this boy’s absence would mean to all who had known him. In cities around the world, memorials were held to commemorate and to grieve. We could not know what it meant to drown, but for a moment, we began to understand the magnitude of what was lost.

In the chapter, “The Gray Zone”, from The Drowned and the Saved, Primo Levi questions if survivors of Nazi terror have succeeded in understanding and making others understand their experience. He goes on to define what he means by the verb “to understand”. It coincides, he says, with “to simplify”. The world is so complex and so tangled, he asserts, that we simplify in order to find our footing and figure out what action we must take. We reduce the knowable down to words and concepts that will allow us to embrace what is incomprehensible. We narrow our vision, set aside the lingering questions, and stand in front of what can be contained. Here is a little boy who has drowned. Look at him and understand the numbers he represents, consider the desperation that put him on that boat. We mourn for him, this boy who symbolizes the very best in human nature, that aspect of ourselves that has fallen victim to the recent waves of terrorist attacks and ongoing violence.

But the photo is deception. As difficult as it is to look at Alan’s image, we can pretend that he died this way, that the water simply carried him to shore and laid him down just so. The picture carves away the messiness. It obscures the futility, the sense of helplessness that comes from confronting the consequences of violence. Because what do we know of what it means to drown? What do we want to know of what it means to slide, despite your terror and your grip, out of your father’s embrace and into the sea? Who wants to consider those last moments before there was nothing left for him to do but give up? Which of us could bear to see that?

But this knowledge is out there. It is in other photographs of other people who also did not make it to shore alive. This is what their photographs tell us that Alan’s does not: There are ways that water acts like a knife on a human body. There are ways it is as cruel as a bullet. There are things that it can do that are as terrifying as anything a human being can inflict on another. These other photographs can be too much in every way: too grotesque, too horrifying, too vulgar. Even these words I am speaking now are not enough to convey what those images can be, what they are.

Here is another photograph: a stretch of pale, rocky land covered in rubble. Slabs of stone with numbers: H5, H7, 5-6-3, dot the uneven landscape in haphazard intervals. A blue sky bears down on this barren scrap of soil that looks like it was meant for nothing but debris. Only the text below the picture identifies what it is: a cemetery for unidentified migrants. When someone who is crossing on a boat heading to Europe drowns, there is often nothing to do but wait for the body to wash up on shore. Where the body arrives is where it will be buried, and it is that country that must claim responsibility.

Those bodies that wash up on shore, however, often cannot be easily identified. They lack fingerprints, they lack papers, they lack someone who can point to them and say, I know who she is. He was a friend of mine. The language of grief gets twisted in the absence of a name. How can we grieve for those we cannot name? They are dead but to be afforded the rights and respect of the dead, you must be someone. You must have a name to attach to a body that is no longer living so those who still breathe your name in search of you can find you then let you go properly. This is how we make a memory of those who have gone: we learn of the loss, we acknowledge the person taken, we grieve, then move forward by filling the gap with remembrance.

If your body cannot be named then it is just a corpse. It is a corpse that is less than human, it is a thing.  While this thing waits to be claimed, you will become something else in this world: you will be called Missing. There is no ritual for mourning the unclaimed. There is no paying of respects for unmarked graves. While your body is thrown into a shallow grave and marked with a number, the you that is attached to a name, the you that now lacks a body, will have simply disappeared from this earth.  You will become one of the disappeared, gli scomparsi. You were here and now you are not.

In cemeteries in Lesbos and Lampedusa, bodies of the unidentified are buried in common graves. Dates, a number, a presumed country of origin are often the only markers in rocky fields growing full. As if the physical scars that so many of us carry, and the tissue that binds our body together, cannot offer up clues to forensic anthropologists, as if those traits cannot tell a scientist how to begin to create a map that will give us back our name, then take us home to our family to be buried, to be mourned and then, to be remembered.

Primo Levi searches for a language capable of carrying a terrible and stupefying history. He struggles to name what feels impossible to identify, a past so complicated and overwhelming that it might be easier to bury it and leave it for lost. Levi is trying to move past his horror. He is asking us to do the same. In each of his writings, he uses words to reclaim his history. He gives us the details of his family, he asserts his humanity by identifying who he is now and who he was then. He is not a number. He is not an entry in a ledger with dates. Those loved ones who died have not disappeared, they are given names and in the pages of his books, they live. Through his writing, Levi moves himself from the camps of the dead to the world of the living by reclaiming his identify and trying to untangle his complicated history.

Perhaps, if he were alive today, it is him we would turn to in search of a vocabulary to encompass what is continuing to leave us speechless. But he has left us a way forward with his insistence that we embrace difficulty, that we refuse to reduce human beings to their simplest terms. “The desire for simplification is justified,” he says, simplification itself is not.”

After reading Levi, what I know is this: that in narrowing our vision to include only what we can tolerate, in leaving thousands of our dead, of our drowned, nameless, we are reducing ourselves. We are limiting our ability to confront those forces that want to remind us we are all nothing but things, bodies to be used as political symbols, bodies to be used to inspire terror, to spread fear, to champion oppression. We cannot quantify what the world has lost, what it is losing, if we cannot name it and name its victims one by one. This act of naming, this search for complexity and for the right words, is a step towards our own redemption.