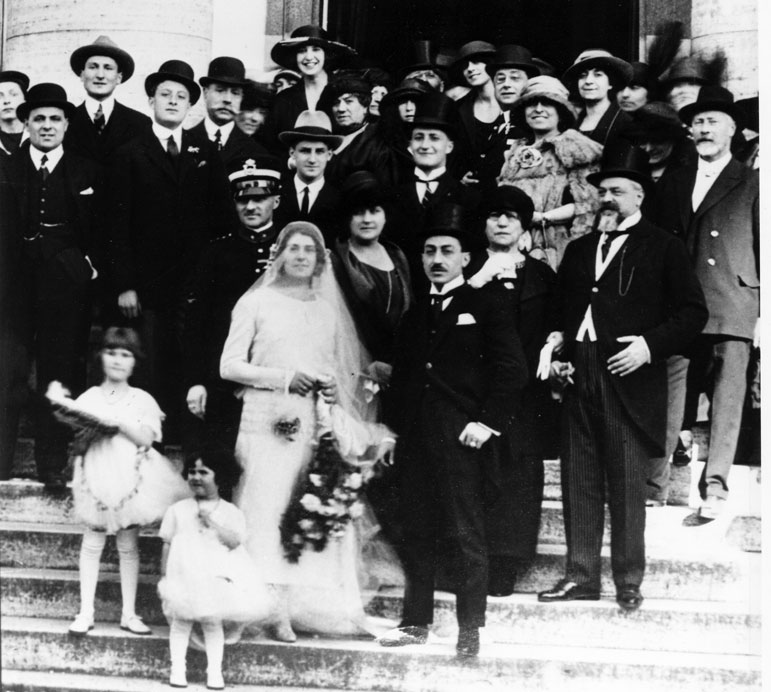 Reflections on an Italian Jewish life

Lucia Servadio Bedarida
Lucia Servadio Bedarida (1900-2007) was born in Ancona July 17, 1900. In 1922 she graduated in Obstetrics from the University of Rome La Sapienza. She was the youngest woman doctor in Italy. In 1923 she married the physician Nino Vittorio Bedarida and worked with him first in Turin and then in Vasto. In 1938 Lucia and Nino lost their jobs following the promulgation of the Racial Laws. A year later the couple fled Italy and settled in Tangier, Morocco. Lucia’s mother and close relatives stayed behind and were deported to Auschwitz. In Tangier Lucia and her husband opened one of the first clinics for women where Lucia will practice until age 81 when she decided to move to the United States and live with her daughters.

From: The Most Ancient of Minorities: The Jews of Italy, Stanislao G. Pugliese, editor, 2002

I am an Italian Jew. My forefathers settled in Sicily, Italy, around the fourteenth century. The genealogical family tree shows that a Simone Servadio settled in Palermo in 1350. Then in the fifteenth century there is Elia de Servadio, followed by Servadio Obadia. The Italian translation of the Hebrew name Obadia is Servadio (Servant of God).

At that time Sicily had fallen under Spanish rule, and an edict was issued to expel all the Jews from the island, where they had lived peacefully and splendidly for centuries. Part of the Obadias settled in Tuscany, part in the Marche, especially in Ancona, where I was born in 1900. By then the Jewish population was already emancipated, with the same rights and duties of any Italian citizen. There were no ghettos, no restrictions, no quotas. We lived where we liked, we traveled as we wished, we chose the professions that we wanted. My brothers and I attended public school and later the university.

I graduated from the Faculty of Medicine in Rome in 1922. Our family frequented non-Jewish friends, and we were accepted as their peers. Our daily life went on normally until I was an adult. Therefore, it was a great shock when the anti-Semitic campaign was launched by the fascist government to brainwash the country; newspapers, radio, conferences, books were preparing the promulgation of the “racial laws” announced to the Italians in September 1938. Newspapers were leading a campaign of smear and accusations in order to convince the people that the racial laws were well founded and justified. It was around 1941 or 1942 when a particularly poisonous and insulting article appeared in an important newspaper.

One of my brothers, Lucio, who had always been a fighter for justice and human rights (he later joined the partisans) was so infuriated by this despicable attack against the Jews that he went to the newspaper ’s headquarters, waited for the author of the article to come out, and punched him a few times. My brother was arrested and sent to confino (domestic confinement or internment) in a small house in the mountains, far away from home, family, and friends. He was there for many months.

I do not know all the exact details of this event, as at that time I was already in Morocco. I am mentioning this episode to point out that even before the big roundup and the “Final Solution,” in Italy, too, the Jews were harassed and persecuted. First came the law expelling foreign Jews. These were, for the most part, young people not accepted in the universities of their own countries. Mussolini had invited them to attend Italian universities, helped them financially to obtain a degree, and prompted them to stay to exercise their profession. Then came the law against Italian Jews. Children could not attend public school; all civil servants were dismissed from their job, including my husband, who was chief surgeon in a public hospital. We had to return our membership cards to clubs, associations, and societies; the Aryans were admonished not to protect or help the Jews.

We were the only Jewish family in a small town in Abruzzo, where we were respected and admired. We were obliged to belong to the Fascist Party, where they gave us high-ranking positions. We felt rejected, lonely, and sad. For the preceding reasons we decided that the time had come to leave Italy and to immigrate wherever possible. My husband and I spent weeks in Rome going from one consulate to another. No country was willing to open its borders to us. Somebody who had told us that he was a big shot in Ecuador ’s embassy and to whom my husband had paid a high sum, had informed us that there was the possibility of a visa and a job in Quito, Ecuador ’s capital. We bought passage on a ship, and we bought trunks that we filled for the big move. At the last minute the visa was refused, and the money was kept. We finally heard about Tangier. We received a letter from Dr. Shakin, a Hungarian ex-student of my husband, one of the first group of expelled Jews. He was asking if my husband was willing to direct a surgical clinic not yet built.

Tangier was, at that time, an international city in the north of Morocco, and Italy was a member of the International Government. For this reason we did not need a visa, and our medical degrees were recognized. Moreover, there was an excellent Italian school to which our children could be admitted and receive a high school education.

Leaving our three girls temporarily with my mother, my husband and I went to Tangier. We liked the city, the position, the ambience, the climate, and we began to prepare for our new life. During our absence my brother Luxardo, who lived in Padova, invited my youngest daughter, Adria, to spend some time with his family, thus reducing my mother ’s burden of caring for our three girls. Adria was then six years old. They arranged that she would travel by train from Pescara to Bologna with a friend of ours, who then would continue her trip. In Bologna my sister-in law, a Catholic, was to meet her and bring her to Padova. To give Adria ’s schedule, my mother sent a very concise telegram: “Adria Bologna 8 A.M., red ribbon on
lapel.” The encounter occurred with no problems, until the police arrived at our house in Pescara and turned our apartment upside down. They went to my mother ’s desk, took letters and her address book, and asked her to follow them to the police station. Simultaneously, the same happened at my brother ’s house in Padova. My little Adria was so frightened that, she later recounts, she wet her aunt’s pink couch, and for a long time she had nightmares.

My mother was interrogated at the police station, where she explained that she was temporarily in Pescara to care for her three granddaughters: Paola, Mirella, and  Adria. At the name Adria, the policeman apologized for the misunderstanding. The telegram had been censored, and the censor had mistaken Adria for the town of Adria, near Bologna, and had imagined a big plot of espionage and smuggling.

Nevertheless, my mother was followed in the streets for one week. This episode demonstrates how, by that time, we were watched and considered enemies. I returned to Italy to fetch our girls and bring them to Morocco. But we still believed that nothing terrible would happen in Italy; we were still Italian citizens, very much attached to our country, and when we left for Tangier, we left our apartment as it was, with all its furniture and household goods.

In Tangier we began our new life, and it was a relatively good one. We escaped the horrors of the war, we never went hungry, we never saw Nazi troops, and we were not aware of the extermination camps and the “Final Solution”; for all these reasons we were very thankful to Morocco, a generous and beautiful country. But it was not so for my mother and grandmother, living in Torino. In 1944 they were rounded up by the Nazis and the fascists of the Salò Republic and deported to Fossoli, the concentration camp for Italian Jews near Modena. They lived there for one month in terrible conditions and in June were transferred to Auschwitz on a cattle train, with no food and no latrine. They were immediately gassed. My grandmother, Nina Levi Vitale, was eighty-nine, and her daughter, my mother, Gemma Vitale Servadio, was sixty-five. Notes and postcards written by my mother from the concentration camp at Fossoli to non-Jewish friends and relatives are a desperate call for help; she ’d ask for food, clothing, money, and toilet articles.

These notes, by my and my brothers’ decision, are now in the archives of the Holocaust National Museum in Washington, where they will be part of the historical testimony of the Nazi ’s ferocity. Only this way will we have avoided their dispersion or destruction by forgetful future generations.(…)

In Morocco we had no news of the Italian relatives and had no idea that genocide was taking place. We were busy in our professional activity, integrating ourselves more to the local life and culture. We were studying languages because we had to deal with various nationalities: French, Spanish, English.  At the end of the war we had to think of our girls’ future, and locally there was no opportunity to pursue a higher education. From Rome, my uncle would write about the confusion and moral laxity existing in Italy and suggested not to send our girls there. So we thought of the United States, considered, at that time, the “caput mundi.” With the support of the consulate, where they found a job and an affidavit from a cousin who was a resident, we were able to obtain visas for two of our daughters. In September 1946 we accompanied them to Cadiz, where they embarked on a Spanish ship. The separation from our two daughters, then nineteen and twenty-two, was a very traumatic one. We were sending them to an unknown country, hoping for a better future, yet we were torn by guilt. Once in the States, they were able to make a new life by studying, working, marrying, and having a family. Later, even the third daughter, after studying fashion design in Italy, joined the sisters in the New World.

Alone in Tangier, my professional activity had increased. I refused my brother’s proposal to move to Rome and work there. I was already in my late sixties and felt too old to start a new life. In Tangier I had many good friends. Members of my family, scattered all over, visited me frequently. Apart from my work I had many interesting social activities. I wrote and published many articles, including a proposal for the establishment of an international university in Tangier, an essay on Dante and medicine, and a study of ancient Arab medicine and its influence on the modern medical mind, which was even read by King Hassan II in 1967. (…)

It was a painful decision to leave Morocco and join my daughters in the United States. I arrived here in May 1981, and I cannot say I have ever fully integrated. “Trees, if transplanted old, cannot take roots easily,” says an old proverb. (…)

Primo Levi’s 100th anniversary will be celebrated around the world through lectures, book presentations, staged readings, and academic seminars. Drawing on its ongoing effort to offer a platform to new…