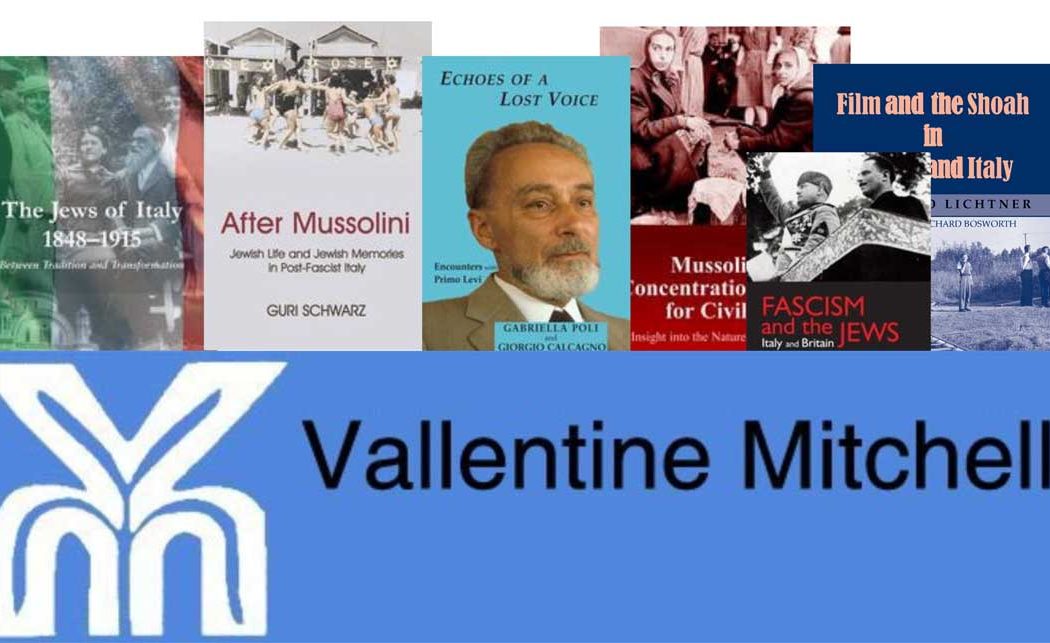 Until September 4th our readers can receive 30% discount on selected Vallentine Mitchell’s titles. When ordering include the discount code: PrimoLevi

Echoes of a Lost Voice. Encounters with Primo Levi

Gabriella Poli and Giorgio Calcagno
Echoes of a Lost Voice is the fruit of thirty years of friendship between the journalist Gabriella Poli and Primo Levi. Gabriella composed the book from all the interviews and conversations recorded with him throughout his career, and above all from her own private conversations with him, held over several years prior to his death in 1987. Despite several biographies and thousands of books and articles about Levi this book is unique, partly in its privileged access to him, and partly because of its unusual form: by using Levi’s own words about himself almost exclusively, it becomes a kind of ghosted autobiography.
May 2017 384 pages
978 1 910383 44 5 HB $74.95 – CPL Discount: $52.47
Echoes of a Lost Voice

Film and the Shoah in France and Italy
Giacomo Lichtner
A unique comparative analysis of the role of cinema in the development of collective memories of the Shoah in these countries. The book tackles crucial themes, such as the politics of history and its representation, the 1970s obsession with collaboration and the ethical debate around cinema’s ability to adequately represent the Shoah. The book offers a highly innovative methodological approach to the controversial relationship between film and history.
2015 244 pages, illus
978 0 85303 949 5 PB $34.95 – CPL Discount: $24.47
https://www.vmbooksusa.com/products/9780853037866

After Mussolini. Jewish Life and Jewish Memories in Post-Fascist Italy
Guri Schwartz, University of Pisa
Schwartz explores the genesis of the ‘myth of the good Italian’, deliberately promoted by the Italian Foreign Ministry to help obtain a non-punitive peace treaty by distancing the nation from German guilt. The book also focuses on community reconstruction and social reintegration, and is the first overall history of post-war Italian Jewry between 1945 and 1961.
2012 280 pages
978 085303 835 1 HB $79.95 – CPL Discount: $55.97
Order: https://www.vmbooksusa.com/products/9780853038559

Fascism and the Jews. Italy and Britain
Daniel Tilles and Salvatore Garau (Eds)
The main fascist parties in both Italy and Britain were founded with no anti-Jewish agenda, before progressively incorporating anti-semitism as official policy. This book explores the factors behind fascism’s adoption and use of anti-semitism, the varying forms that it took, and the ways in which it evolved. Through comparative examination of the Jewish communities in interwar Britain and Italy, the book unravels some of the complexities of Jewish attitudes towards and experiences of fascism.
2011 224 pages
978 0 85303 864 1 HB $79.95 – CPL Discount: $55.97
Fascism and the Jews

Mussolini’s Concentration Camps for Civilians. An Insight into the Nature of Fascist Racism
Luigi Reale
This book fundamentally challenges how Italians remember Fascism, Mussolini, life in Italy during the Fascist Years and what Italians know of the Fascist Concentration Camps. These were set up all over Italy between 1940 and 1943, directly influenced by Mussolini’s Race Laws of 1938. The reconstruction of the camps, detailed for the first time, provides a unique insight into Fascist racism and how Italy, at the time, chose to deal with people who were neither Christian nor Italian.
2011 175 pages
978 085303 884 9 HB $74.95 – CPL Discount: $52.47
Mussolini's Concentration Camps for Civilians

From Lwów to Parma. A Young Woman’s Escape from Nazi-Occupied Poland
Klara Rosenfeld
Klara Rosenfeld was born Klara Silverman in 1924 in Lwów, Poland. This book tells the story of her courageous fight to survive the Holocaust, the loss of the world she knew, the help given to her by an Italian soldier and her escape to a convent in Italy. After the war she was united with other Jewish survivors in a ‘kibbutz’ in Parma. In 1944 Klara and her family went back to the town of Fontanellato, Italy, to present her rescuer, Fosco, and his sister Tina with the Righteous Gentile Award from Yad Vashem and the government of Israel.
2005 192 pages
978 0 85303 603 6 PB $22.95 – CPL Discount: $16.07
From Lwow to Parma