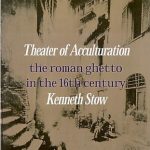 Kenneth Stow, Theater of Acculturation: The Roman Ghetto in the Sixteenth Century, University of Washington Press, 2001

When Pope Paul IV closed the Roman Ghetto in 1555, the Roman Jews had to cope with a totally new predicament. They had been living at Rome since Caesar’s days in close and quite harmonious relations with their non-Jewish neighbors. Their position within the Christian environment began to deteriorate in the later Middle Ages, when they were no longer seen as Romans with minor cultural differences but more and more only as Jews.

In the fifteenth century, the idea of converting them to Christianity became the central theme of Christian-Jewish relations, and it was the belief that Jewish mass conversion could be fostered by compulsion that urged Paul IV to found the Roman Ghetto. In the long run, the ghetto situation had surprisingly little impact on the religious and cultural identity of the Roman Jews. Very few became Christians, and in 1870 they left their compulsory segregation with an almost unshaken cultural heredity.

They were still Jews, and they were still Romans. Kenneth Stow finds the secret of this astonishing cultural survival in two unverbalized strategies: conservative acculturation and arbitration. His sources are about 6,000 acts of the so-called notai ebrei, Jewish notaries who worked in the ghetto on the same footing Christian notaries did outside the ghetto. This material, preserved today in the Capitoline Archives at Rome, spans from about 1536 to about 1640, when the notai ebrei were finally suppressed. Stow has published two volumes with summaries of the first 2,000 acts (The Jews in Rome [1995–1997]). (The American Historical Review)

This compact book provides the reader with a general overview of Rome’s Jewish ghetto, especially in the years just leading up to its establishment, in 1555, and the decades immediately after.  The primary sources that Stow uses for this study are for the most part the Jewish notarial documents, held in Rome’s Capitoline Archive under the rubric of the Notai ebrei and running with a certain density into the years after 1600, although not actually abolished by the papal vicariate until around 1640.

Theater of Acculturation is based on a series of three lectures that Stow gave as the Ruth and Clarence Kennedy Professor of Renaissance Studies at Smith College, in late 1996.  He has further enhanced the three lectures with an extensive introductory forward and a brief afterword. The chapters deal with the Roman Jews and their Ghetto from three different approaches, although Stow allows his topics a good deal of overlap throughout the book, perhaps reflecting the original lecture format of the work.

Stow uses his first chapter, “The Jew in a Traumatized Society,” largely to provide background for the Ghetto’s creation, through Paul IV’s 1555 bull, Cum nimis absurdum, as well as some descriptive material on the physical Ghetto (for which he provides some very useful illustrations and maps).  Only in chapter 2, “What Is in a Name?” does Stow really begin to make use of his primary source materials–the hundreds of agreements and arbitrations held in the Notai ebrei.  His main interest in so doing in this chapter is to provide some archival support for his assertions on the position of Jewish women, the relative independence they enjoyed, in the family and in the Jewish community as a whole, during this period.

In the final chapter of the book, “Social Reconciliation, from within and without,” Stow avails himself of a few more of these notarial agreements, primarily to demonstrate the ways in which arbitration worked in the Ghetto as an alternative to the formal justice that would have otherwise been imposed from without, by the papal Vicar.  The afterword takes the story past the abolition (by one such Vicar) of the arbitration process, around 1640, and makes some suggestions about how and why Ghetto society fell into a kind of stasis, almost a deep freeze, that lasted practically until its abolition in the 1840s.

Theater of Acculturation will prove useful for anyone seeking a brief, if not exactly concise, overview of Rome’s Jewish Ghetto.  It also reveals some of the disadvantages of publishing a lecture series as a monograph. Stow has heaped on the endnotes to the point where they begin to prove more of a burden than an aid to the reader.  Perhaps he did so in an attempt to thicken without greatly altering his original spoken narrative, but when the amount of notes in a work amount to well over half the size of the text itself, it is time for the author (or his editors?) to take some of the assertions and examples buried in the notes and make them more accessible up front.

In fact, one soon notices that the material of Notai ebrei, which Stow asserts form the archival core of his source material, and which he has used extensively in his earlier, larger studies on the Roman Jews, are employed very sparingly in the text of this work.  The reader who is not willing to constantly turn to the back of the book is left with very little flavor of what it was actually like to live in the Ghetto in the crucial years after its foundation.  Only in his third chapter (lecture) does Stow really begin to explore what was apparently the real topic of this work:  what the notarial language of these documents can reveal about Jewish attitudes and means of self-presentation.  Yet, without a comparative analysis of Christian notarial materials (in particular, of examples from the Ghetto after the 1640s, when the job was turned over to Christian notaries), it is difficult to see what the language, and especially the reticence, says about a specifically Jewish mode of social comportment.

Ironically, the many supporting or contrasting examples that Stow does offer, culled from his wide bibliography of early-modern Jewish studies throughout Italy and Europe (especially Germany, though this hardly shows up in the index), tend more to blur his narrative line than to bolster it. There are moments when the reader might gladly forego what are essentially digressions into the larger Jewish historiography, much of which seems only peripherally related to that of the Roman Ghetto.  Certainly in such a short work, it could be more useful to keep the focus better fixed on the topic at hand–the Roman Jews–in the hope that one might go away from the work with a better idea of what the people who occupied this unique community for almost three centuries were actually like.

The “Aryanization” of Italian Musical Life

This article was originally published by the Orel Foundation  and is republished with minor edits by permission.  In Italy there is absolutely no differentiation between Jews and non–Jews, in all fields,…