Events at this location

27Jan8:30 am2:30 pmGiorno della Memoria 2023Ceremony of the reading of the names of the Jews deported from Italy and the territories under Italian control.8:30 am - 2:30 pm Consulate General of Italy. 690 Park Avenue, New York, NY 10065MemoriaMemoria 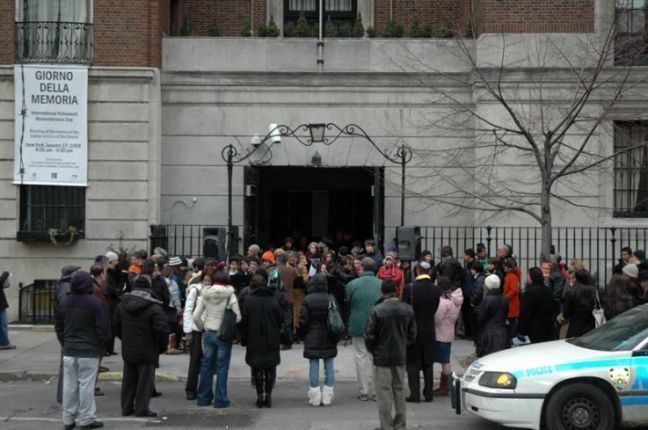 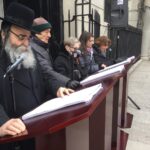 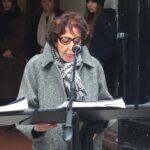 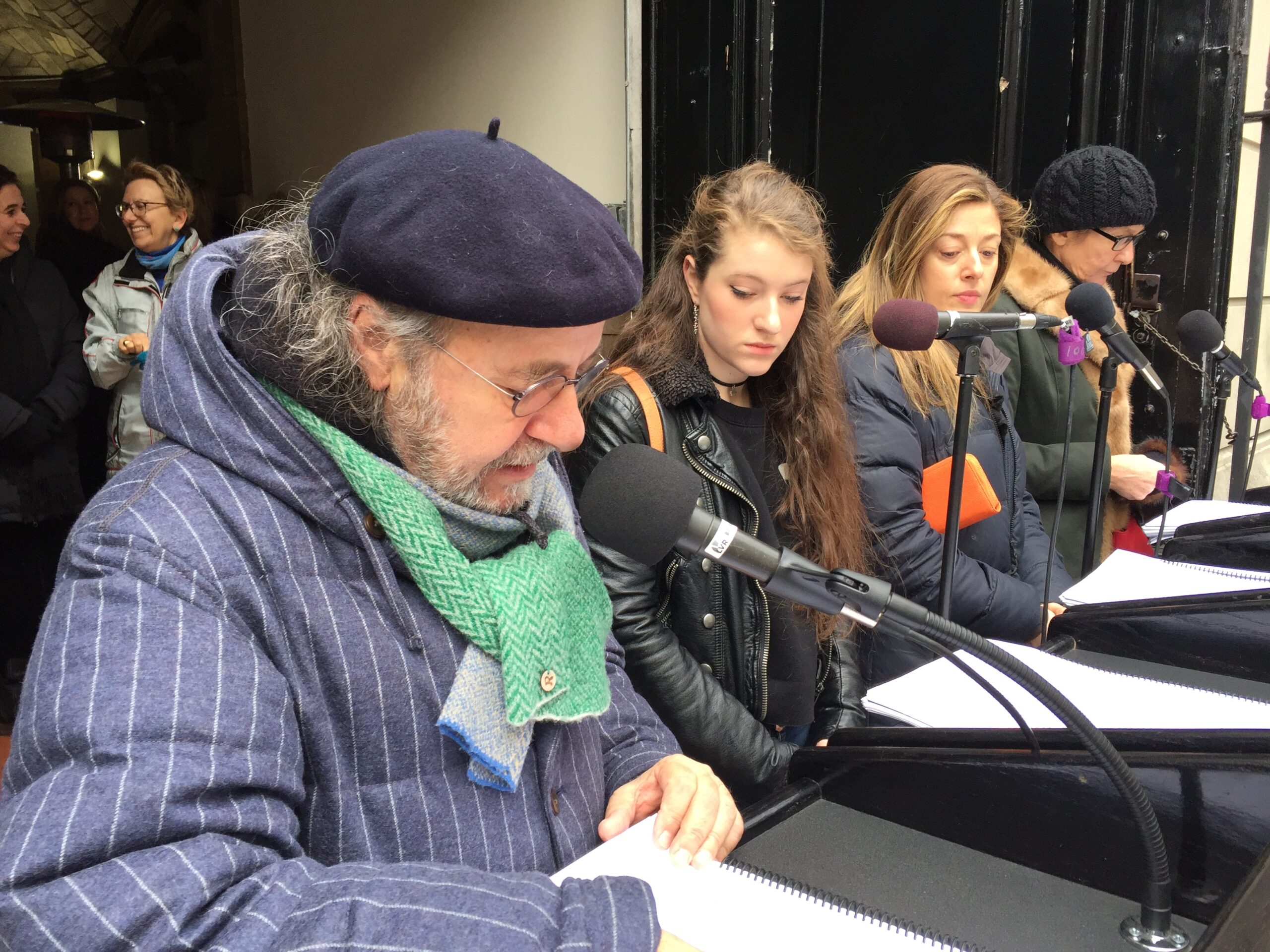 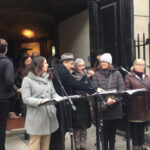 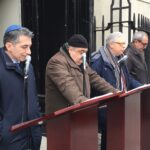 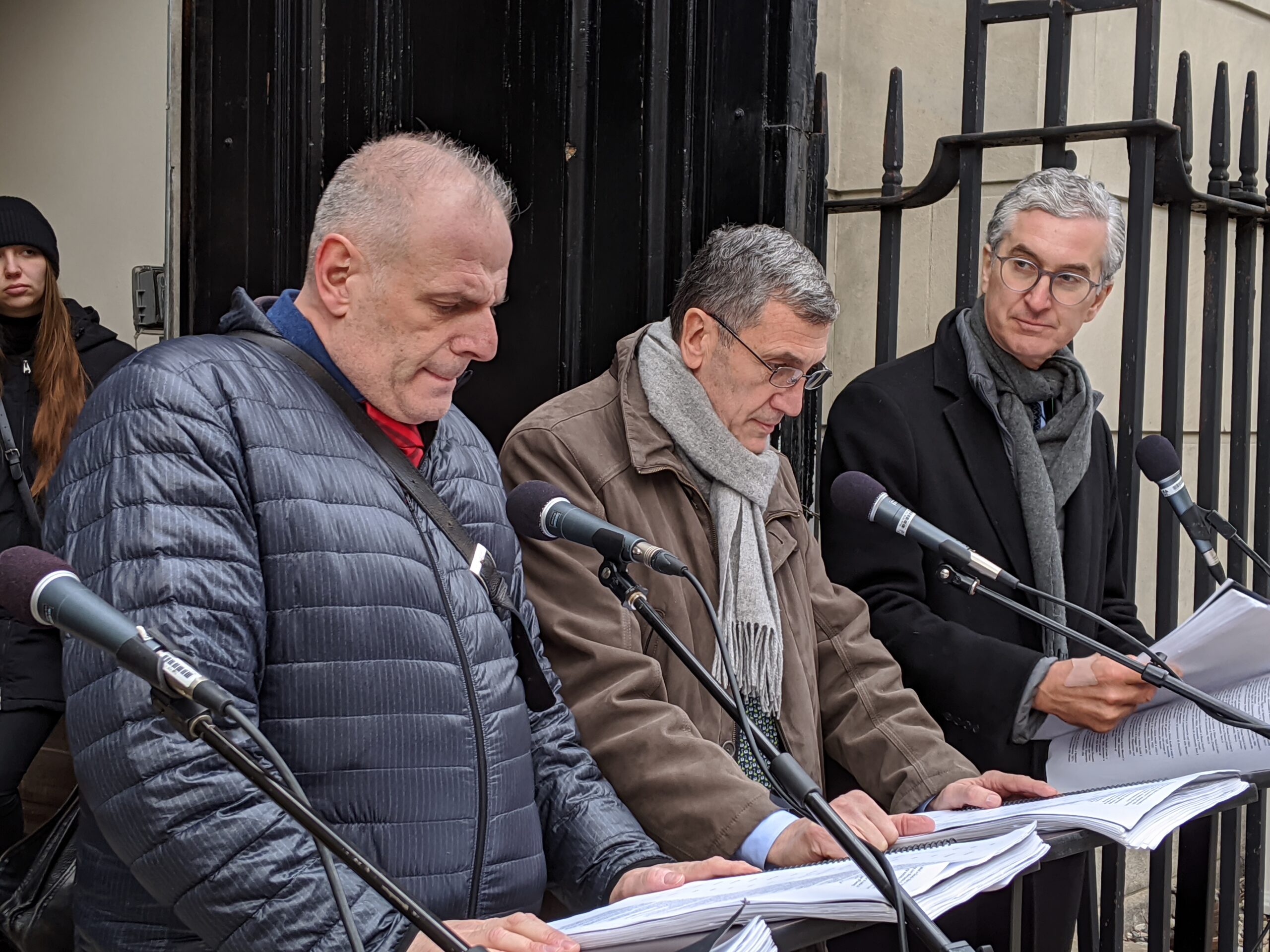 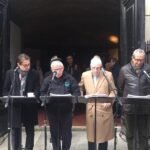 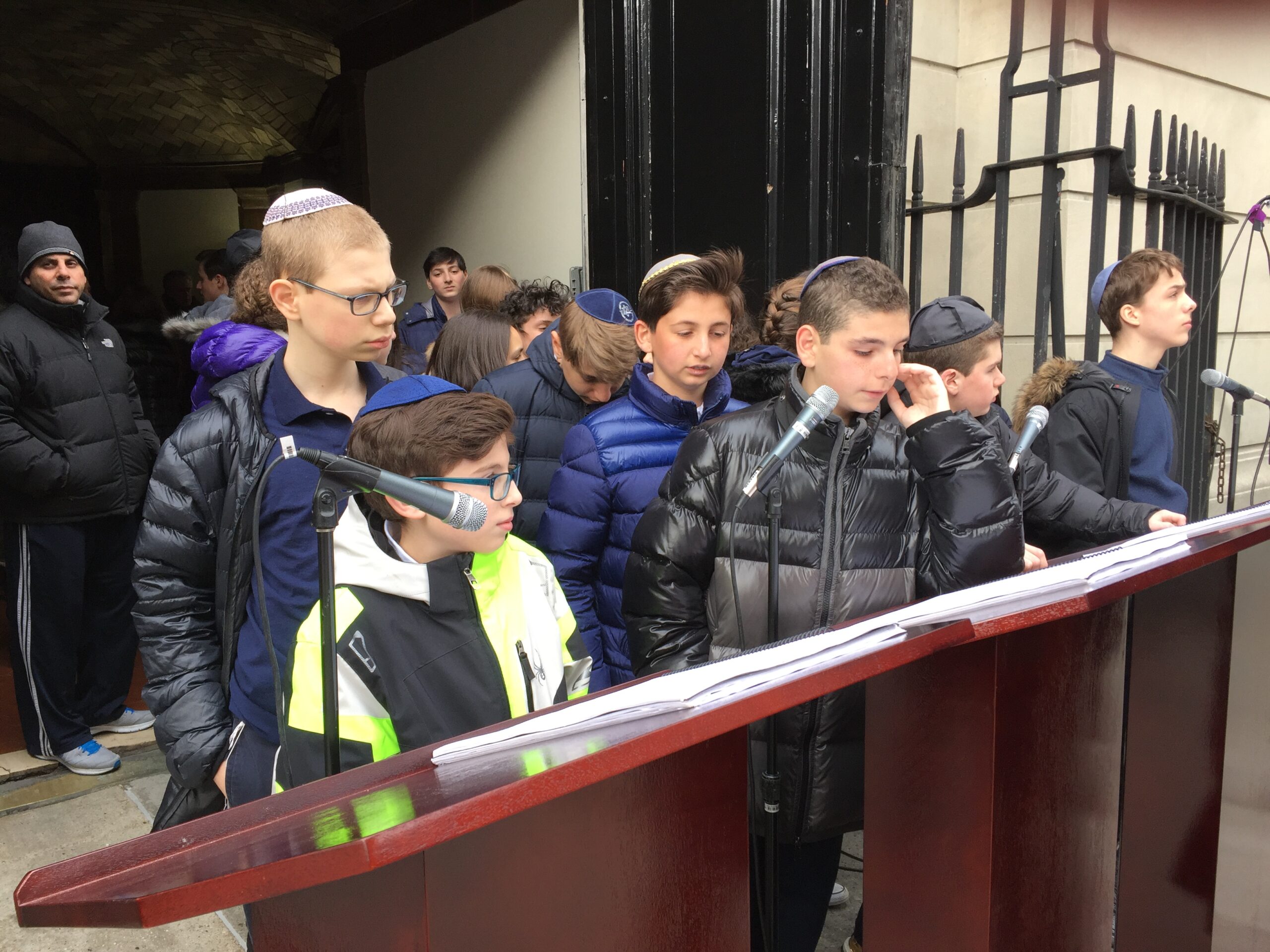 Each January 27, we read the names of 9,700 Jewish men, women and children deported from Italy and the Italian territories between 1943 and 1945. The ceremony is open to the public and held outdoors, in front of the Consulate General of Italy. Everyone can join and read.

Today, the collective awareness of this past is becoming blurred or mythologized, ideologies of violence and prevarication are reappearing with vengeance, emerging from societies in which inequality, competition, suprematism, and conflict shape consciences. They circulate without the possibility of critical debate and intervention, through media run by algorithms. The concerns Primo Levi expressed not only in his Auschwitz memories but also in his stories about the post-war society dominated by unregulated technology and the bare pursuit of profit are unfolding before our eyes.

Never before have Levi’s words resounded more aptly to address the world in which we live: “You who live safe in your warm houses”.

It is not the victims, or not only the victims, who should be expected to warn society about the perils of intolerance and injustice. The victims know what it means to lack rights, to be disparaged, and walk the path toward elimination. Alone however, they cannot explain it to those who are firmly established in their homes, whose rights are not contested, who are not excluded by the law. It is those who are safe, who must take a step forward and consider human conditions beyond their experience and imagination: “Consider if this is a man.”

Background reading: what we remember

Through the years Centro Primo Levi has been active in New York, we have often been asked about the sources of historical knowledge. For example, who reconstructed the list of the names of the deportees we read on January 27? How do we know about the implementation of the Racial Laws; the institution of concentration camps in Italy; the expulsion and arrest of foreign Jews; the confiscation of Jewish assets; the collaboration of the Italian police and carabinieri; the informants; the persecution of the Jews in colonial territories; the people who lent help; the work of the Jewish relief agencies; the responses of the Vatican?

The answers are in articles, books, programs, and seminars, some of which can be found on this website. However, these questions are also relevant for reasons that are marginal to those that may have motivated them. They prompt us to reflect on the process of knowledge that led us to this moment and to be able to commemorate those events. This knowledge has not always been available, if not through the memories of the victims. It took many people’s initiative, courage, dedication, and painstaking labor to build the foundation of public remembrance. It is essential to remain aware that knowledge often takes shape against odds and opposition. While the results of historical research are never definitive and always open to development, they are also inestimably precious, and we must handle them with respect, share them with accuracy, avoid making them instruments or weapons in current conflicts, and relate them with empathy and a sense of proportion. We can never take them for granted.

The process that led to the institution of Giorno della Memoria began many years before 2000 when, following the efforts of the Task Force for Holocaust Education with the governments of Germany, France, and Italy, January 27 was chosen as Holocaust Remembrance Day. With this step, the liberation of Auschwitz became a symbol of Europe. Five years later, the observance was adopted by the United Nations and most European countries. The establishment of this anniversary marked a shift from the one-sided remembrance of Yom HaShoah to an understanding of the persecution of the Jews as an event that shaped and should concern all European societies. Complexities and incongruences emerged as countries from the former “Eastern block” joined the EU, and awareness of the persecution in former colonial territories entered research. Many of these questions are far from being resolved or even explicitly addressed and pose serious challenges to the public discourse on what has come to be defined as the “Holocaust.”

Challenges notwithstanding, institutions in Italy and throughout Europe commemorate January 27, drawing on a vast body of knowledge that, for the most part, is rooted in research work. Some of it began immediately after World War II. By 1945, the Italian Jewish community had lost about 35% of its pre-war population: 20% were murdered in Auschwitz, and the other 10% to 15% converted to Catholicism or settled abroad. In the newly established democratic nation, the Jewish population was one of the few tangible reminders of the fascist past. Though the Regime had perpetrated countless crimes that were quickly forgotten, the persecution of the Jews could not be so easily concealed in the national narrative of liberation and redemption. This memory had to find its expression in an environment that had successfully sunk into oblivion the most uncomfortable facts of its recent past, avoiding the equivalent of a “Nuremberg” trial and a process of defascistization.

As masterly depicted by Giorgio Bassani in his short story Una Lapide in Via Mazzini, the attempt by Jews to re-enter Italian society was greeted with suspicion. Italy had ruthlessly stripped Jews of their rights, assets, homes, and jobs. It had collaborated on the deportation of about 9,700 people (between the peninsula and the Italian territories) to extermination camps. There was a societal expectation that the Jews, like all other Italians, would participate in a collective abdication of responsibility for the dictatorship and Fascist history.

For the Italian Jewish community, the preservation of recent memory was prompted by the immediate need to look for deported family members. This work was initiated by one man, Massimo Adolfo Vitale, a retired Jewish colonel of the Italian army who had been dismissed in 1938 and whose immediate family had been deported. After the liberation of Rome, Vitale strenuously began to collect information about the Italian victims whom, many hoped, could still be helped.

Vitale produced a report of over twenty pages written in French and entitled Les persecutions contre les juifs en Italie 1938–1945. As early as 1946, he provided the first evidence-based account of the persecution of the Jews in Italy, asserting the complicity of the Italian authorities and of ordinary people as well as the ambiguous position of the Vatican. Without failing to recognize episodes of support, Vitale concluded that “after the armistice, the courageous people who ignored the dangers to save some Jews existed, but there were few of them. However, the policemen, together with the carabinieri, in almost all the cases, carried out their activity of denunciation, house searches, arrests, and transfers to internment and death camps. Vitale’s work became the basis for the research and public activities of the Center for Contemporary Jewish Documentation (opened in Milan in 1955), leading to the compilation of the database of Italian deportees published in 1991 by Liliana Picciotto under the title Il Libro della Memoria and available online as Nomi della Shoah Italiana(http://digital-library.cdec.it)

A crucial period for the advancement of research at CDEC began in 1964 when Eloisa Ravenna was director. The Court of Dortmund, Germany, asked Ravenna for help to document the role of Friedrich Bosshammer in the deportation of thousands of Jews from Italy. She understood that it was an opportunity to expand CDEC’s work and to access the police and ministerial archives that had been, up to that point, off limit. With the help of the German court’s request, research on the persecution expanded from primarily oral history to the documents of the Italian State Archives. The process took years, and in 1973, Bosshammer was sentenced to life imprisonment. Nevertheless, subsequent trials for other crimes had opposite outcomes, and Eloisa’s testimony was not admitted as evidence. It was, however, the beginning of a new historical awareness and the foundation of the extensive research work behind the public discourse on the Fascist and Nazi crimes.

Only in 1988, for the commemoration of the 50th anniversary of the promulgation of the Racial Laws, Italy’s government took steps to allow broader research in the Italian archives. It was a turning point in historiography that led to the publication of Michele Sarfatti’s classic The Jews in Mussolini’s Italy and a long series of ground-breaking studies that debunked previously accepted assumptions on the relative benevolence of the Italian Regime toward the Jews.

It took ten more years before the Italian government established an official commission to document some aspects of the persecution, thus accepting formal responsibility for what had happened. Many other events and political transformations have since shaped Italy’s collective memory of the Shoah, and this is not the place to discuss them. Nevertheless, it is urgent to remind ourselves that the context in which we remember today would have been unthinkable only twenty years ago. There are positive aspects to this but also perils and pitfalls. The history of how research and collective remembrance took shape (not always consistently with one another) can give us perspective and balance, help us see other histories that our society tries to elude, create networks of solidarity based on the commitment to knowledge rather than on causes that increasingly embrace the tools of worshipping and policing rather than those of intellectual quest and debate. By including in the remembrance of January 27 the history of the work that enabled our knowledge, we wish to invite everyone to reflect on how and what we remember.

When the Past Was Present