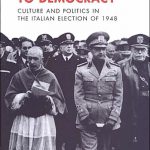 Robert Ventresca, From Fascism to Democracy: Culture and Politics in the Italian Election of 1948, University of Toronto Press, 2004

Professor Ventresca
Professor Ventresca, a graduate of King’s, received his PhD in History from the University of Toronto in 2000. He teaches courses on the history of authoritarianism and totalitarianism, with a particular focus on Fascist Italy, Nazi Germany and Stalinism. Current research and teaching interests include church-state relations in 19th and 20th century Europe, the Catholic Church in the modern era, the history of fascism and its legacy in postwar Italy, and the history of Catholic-Jewish relations in modern times.

From Fascism to Democracy tells the story of the birth of the post-war Italian political system through the lens of a single event: the Italian national election of 1948, the first parliamentary election of the Republican era. Robert A. Ventresca offers the first comprehensive analysis of this central topic of contemporary Italian and European history. Bringing together the broad political and diplomatic narrative of 1948 with the social and psychological dimensions that determined how ordinary Italians experienced the election campaign, this book is about much more than just a political event. Broad in scope, it is a story about the fall of Fascism and the achievements of the Italian Resistance, Italian political culture, American influence in Italian politics at the start of the Cold War, and the interaction between Italy’s secular and religious traditions. From Fascism to Democracy expands on the common understanding of what is ‘political’ to examine how such factors as popular piety, gender, and historical memory became intertwined with the politics of Italy’s fledgling democracy.

Giuseppe Veltri, Renaissance Philosophy in Jewish Garb. Foundations and Challenges in Judaism on the Eve of Modernity, Brill Academic Publishers, 2008 Based on several years of research on Jewish intellectual…