The Department Store of Salomon Alhadeff 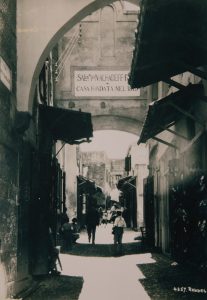 The Department Store of Salomon Alhadeff was founded in the mid-1800s. It was the biggest department store on Rhodes and was owned and operated by a Jewish family. Everyone who needed goods ranging from household items—sheets, pillowcases, textiles, and pots and pans—to the latest clothing and shoe styles shopped there. Stella recalls it as “a fantastic store.” It occupied both sides of the street with an overpass connecting the two buildings. The name of the owner and date of founding, both visible in this photograph, were carved into the overpass.

Boys at the collegio rabbinico 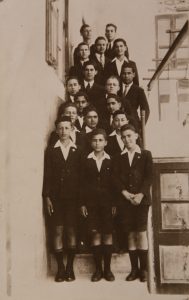 Although Rhodes was a small island with a relatively small Jewish community, it maintained its own Collegio rabbinico (Rabbinical school), whose Jewish male students studied with Rabbis from places ranging from Italy and Istanbul to Jerusalem and Alexandria. The students likewise came from all over—including students from Egypt, Syria and Turkey—not just from Rhodes. Students lived inside of the collegio and those who were from abroad were always invited to Jewish homes for the holidays. Instruction was in a mixture of Hebrew, Italian, French, and Ladino. Further, the collegio rabbinico was subsidized by the Italian government under Governor of Rhodes Mario Lago.

The collegio rabbinico accumulated a first-rate library of religious texts and commentaries in Hebrew and Italian. There were other yeshivot: the Yeshiva Menasche and Yeshiva Israel. In 1932, Isaiah Sonne made a census made of all of the books. Of these books—some of which were taken in from the other yeshivot—were seized by the Italians under the Racial Laws, some were shipped to Palestine and some stayed in Rhodes. The ones that remained are currently undigitized and housed in the Greek State Archive. We are fortunate to have access to some religious books from Rhodes in the exhibit: Aron Hasson, has collected religious teaching materials from Rhodeslis, such as Rabbi Albagli, who brought books out of Rhodes with them well before the deportation. 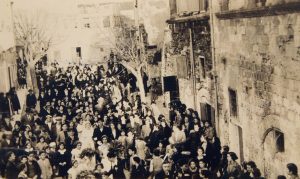 This iconic photo—which has taken on a life of its own, appearing in contexts far from Rhodes—shows the 1935 wedding procession of Daniel Behor Israel and Julia Hasson. The procession is walking down the street known as the espejo among the Jews of Rhodes, a street lined on one side with large buildings built by the medieval knights of St. John (at one time, one of these housed the first Collegio rabbinico) and houses on the other side of the street. The stairs in the photo lead up to the homes of the Benveniste and Capelluto families. The group is heading towards a left turn, seemingly en route to the Sinagoga grande. The bride might have had Yosef Benatar, a Jewish dressmaker, design the dress, she might have gone to the Greek woman dressmaker many of the women in the Jewish Quarter used, or she could have brought the dress from outside of Rhodes.

Hizkia Franco, the head of the Jewish community, is visible in the photo, which was likely taken from Matilda Israel’s terrace, directly across from what is today Santa Caterina.

The groom returned to Rhodes from the Congo to marry the bride. He was the oldest brother of Albertico Israel and his father was a baker who maintained one of the three public ovens. Of these three ovens, one was only for use on Pesach, and the other was maintained by Clara Gabriel’s uncle. Either the daughters—never the mothers—or Jewish men hired for the task brought the goods to be baked in the public oven. 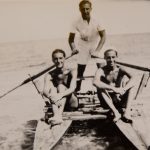 Before the Racial Laws, they were friends who went out sailing together—a typical friendship across religious and ethnic boundaries on Rhodes, though perhaps particular to those Jewish youths who enjoyed the visibility of maintaining friendships with Italians. Here the friends went sailing, but similar such groups also gathered on Saturday afternoons to stroll or most Saturday evenings, motzei Shabbat, to sing songs in the various languages of the youths of Rhodes and to share sweets. Friendships were a part of island coexistence. Turkish neighbors gifted their Jewish friends special sweets for Rosh Hashana.
But for Pepo, the reality of his photo is darker and more foreboding: he stands with his chums Sergio Gallina, the son of Dr. Gallina, the head doctor of the hospital on Rhodes, and Giulio Grassini, the son of the head of the Italian police force (carabinieri)—the man who was eventually provided the gestapo in Athens with a list of Jews from Rhodes.

Yehuda Levi in the synagogue

The most notable element of this photograph is its bizarre label: “La Chiesa musulmana a Rodi.” An Italian tourist must have taken the photo and have mistaken the house of worship for a mosque, thus terming it The Muslim Church of Rhodes.
Yehuda Levi wears a fez for prayer—in this case a memorial service marking the anniversary of his mother’s death—as was the custom among older generations of men on Rhodes. The photograph shows many of the features still preserved in the synagogue today, from the iconic inlaid stone floor to the teva.

The Rhodes football (American soccer) team comprising young Jewish men was known as Gioventù Ebraica di Rodi (GER; The Jewish Youths of Rhodes). In this 1935 team photo, Giuseppe Alcana, wearing the black jersey, is the goalie. The other members of the team included Alberto Levi, Giacomo Levi (Alberto’s brother), Shimon Benveniste, “Caranfil” Hasson (meaning carnation – the kind of flower; it seems likely that either he or someone in his family was a flower seller), Buchuk Cohen, Giacomo Notrica, Masliah Hasson, Giuseppe Levi, Bension Levi (Giuseppe’s brother) and Aron Franco. There were two Italian teams: the FERT (from the St. John’s Knights’ motto, Fortitudo Eius Rhodum Tenuit) comprising primarily Italian young men; and La Polisportiva, the team of young Italian men representing the fascist party. Turkish and Greek youths also had their own teams. Each team had its own cheer.

During soccer games, those Jews who did not go to the stadium would wait right inside of the entry gate to the Juderia to learn whether the GER had won or lost.

Young Students in the Courtyard of the Jewish School

Professor Renato Cohen was director of the Scuole Israelitiche italiane (Italian Jewish School), and
Professor Mihailof, the Hebrew teacher from Russia, also appears in the photograph. Until 1925 the school had been affiliated with the Alliance israélite universelle, the Paris-based organization that opened numerous French-language Jewish schools across European and Eastern diaspora communities. Stella attended this school for four or five years before moving to the Italian school where she and a handful of other Jewish girls who wanted to pursue a humanistic education studied with Italian girls under the tutelage of nuns; the Jewish boys who opted for the Italian school studied with Italian boys, with priests as their teachers.

The joy on the faces of these young men is apparent, even when their reality was precarious, given that the recent implementation of the Racial Laws prevented them from going to school. Indeed, the writing on the back of the original photo is telling: “La compania disperata” (The desperate company). Despite the prohibition, some of these young men continued to study and formed a study group that included Stella, led by their beloved teachers from the Italian school—Professor Sotgiu (philosophy), Professor Noferini (literature) and Professor Bianchi (Greek and Latin)—who continued teaching them in secret at the risk of attracting the attention of the authorities. In fact, upon traveling to Italy to visit family, Professor Noferini was not permitted to return to Rhodes and became active in the Resistance. After the war, when Stella, her sister Renee, Lucia Franco, Alise Tarica, Susanna Levi and Rebecca Capelluto were released from the camp and became the first prisoners to return to Italy, Professor Noferini arranged their lodging in Florence. These young men, playing guitar, accordion and singing were likely to have sung songs in Italian, Ladino and some Hebrew.