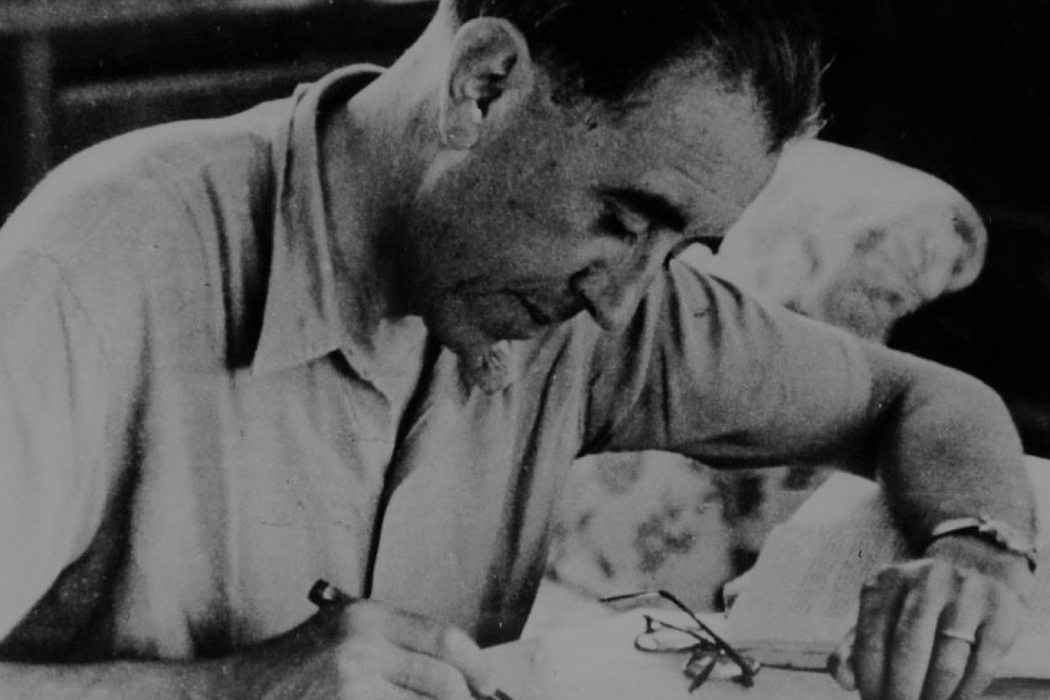 Piero Calamandrei
Piero Calamandrei (Florence, 21 April 1889 – Florence, 27 September 1956) was an Italian author, jurist, university professor and politician. He was one of Italy’s leading authorities on the law of civil procedure.

Calamandrei was critical of Italian fascism and signed, Benedetto Croce’s 1925 Manifesto of Anti-Fascist Intellectuals. He was linked to the Florentine journal Non mollare! (Don’t Give Up!) published between January and October 1925. Nevertheless, he took the academic oath to Mussolini in 1931 and was one of the jurists involved in the reform of the civil code between 1939 and 1942.

After the fall of the fascist regime in 1943, the Allies named him rector of the University of Florence. He was elected to the Constituent Assembly in 1945. He was among the founders of the European Federalist Movement.

Two years after the liberation of Italy, April 25th, 1945, the Constitutional Assembly discussed how to define the relation between Church and State and whether to reintegrate in the democratic constitution the Lateran Treaties, signed in 1929 by Mussolini and the Vatican secretary of State Cardinal Pietro Gasparri. Here is an excerpt from one of the most vocal critics of the first constitutional draft, the jurist Piero Calamandrei.

For the sake of clarity in the Constitution, there must be no implied assertions, postponements, or mental reservations, I will now tell you something about the relations between State and Church.

President. Mr. Calamandrei, I think you will not want to go into the merits of this issue.

Calamandrei. I know perfectly well what the limits of this discussion are and I will speak only from the point of view of method, without entering the merit of the issue. I wish that what I am about to say, and which strikes the sensitivity of my colleagues and friends of the Christian Democratic Party, will be listen to not only with a patronizing eye – of this I am sure – but also, I would say, with sympathy; in short, I would like that my words will not be used to brand me with the crass epithet of anticlerical. […]

Therefore, in regard to the relations between State and Church, I have the impression that the method used in the formulation of Article 5 lacks the clarity which, in my opinion, is indispensable if we want our work to produce a serious constitution.

Meanwhile, observations of method, could also be made on the first part of Article 5, which states that “the State and the Catholic Church are, each in its own order, independent and sovereign. Here, the jurist might ask: who is speaking in this Constitution? Who speaks in first person? Is it the Italian state? Is this Constitution a monologue or is it a dialogue? Is there a single person speaking or are there two interlocutors?

This article could fit in an international treaty, not a constitution. But my observation is mainly against the second paragraph: «Their relations are regulated by the Lateran Pacts. Any modification of the Pacts bilaterally accepted does not require a constitutional amendment ».

Here one can observe the procedures to revise the Constitution; if this article remained as is, constitutional rules could no longer be modified by the unilateral will of the State that made this Constitution. Some norms could only be modified with the consent of the other party, the Church; but this would be a real renunciation of a part of the State’s sovereignty.

I realize that  these are questions that will be dealt with at the opportune moment, instead I ask myself, the meaning of this formulation: “Their relations are regulated by the Lateran Pacts”. Are these Lateran Pacts included in the Constitution? Are they becoming part of our Constitution by implication? The report by President Ruini seems to answer yes; it tells us that, in this way, the Lateran Pacts become part of the order of the Republic, and will have a special status of a constitutional nature. Now, I will grant, that our Constitution may expressly repeat all the articles of the Lateran Pacts; I may even agree, hypothetically, that the Italian Republic should be allowed to openly proclaim itself a confessional Republic: but if this is the case, it must be stated clearly; this need for clarity, requires that things of such importance not be done on the sly with a cryptic reference. This will not be appreciated in its full significance by the man who does not know about laws, who does not know precisely what the content of these pacts implies and does not know that many norms of these Lateran Pacts are in conflict with other norms in this Constitution.

A New York newspaper, the New York Times, according to a statement from the Associated Press (I don’t know if the news is true) reported that on January 21, 1947, while President De Gasperi was visiting the United States, the delegates of 25 Protestant religious groups, representing 27 million people, asked him if it was true that the text of the Lateran Pacts would be included in the Constitution. President De Gasperi replied that he did not believe that the Lateran Pacts would be included. He was telling the truth, because the Lateran Pacts were not explicitly included in it; they have only been referred to by implication.

They will not be written in the lines, but between the lines; and it will be necessary to read them, so to speak, in transparency. So, for example, let’s take Article 5: “The State and the Catholic Church are each in their own order independent and sovereign:” here, in transparency, we must add Article 1 of the Treaty, which states: “Italy recognizes and reaffirms the principle expressed in Article 10 of the Statute of the Kingdom of 4 March 1848, according to which the Roman Catholic Apostolic religion is the only religion of the State.”

This article will be transfused by reference into our Constitution. Will it be good, will it be bad? Perhaps, again by hypothesis, I will agree with you in saying that it will be good; but it is necessary, to state clearly, that this article is there. And then: “Citizens, regardless of sex, race and language, social conditions, religious and political opinions, are all equal before the law.” But here it will be necessary to add, in transparency, Article 5 of the Concordat: “Priests who are accused of apostasies or restricted by censorship may not be hired or kept in teaching and clerical positions nor in any job, in which they are in immediate contact with the public .”

And then there is Article 27 of the Constitution, which says: “Art and science are free and their teaching is free”. But there is, in transparency, Article 36 of the Concordat: “Italy considers the teaching of the Christian doctrine to be the foundation and crowning of public education, according to the form received from the Catholic tradition”.

Then there is Article 94 of the Constitution stating that «the judicial function, expression of the sovereignty of the Republic, is exercised in the name of the people. However, in transparency, Article 34 of the Concordat states instead that “cases concerning the nullity of marriage and its dispensation are reserved to the competence of ecclesiastical courts”

Will all of this – I want to keep within the limits of this discussion – be good or bad? When we talk about it again, we’ll see. But now, just in terms of method, I say that it is not in this way that a clear Constitution is made. It is necessary to understand each other in a clear and fair way, to put our differences on the table, not to gamble blindly. […]

In discussing these issues, I have always maintained that, in order to prepare the text of a new democratic constitution, it is more appropriate and more prudent to move from the point of view of the minority (it is not difficult for me, given the party to which I belong!), of what the minority may be tomorrow, so that the constitutional safeguards are especially designed to protect the rights of this minority. The essential character of democracy consists not only in allowing the will of the majority to prevail and become law, but also in defending the rights of minorities, that is, of the opposition which is preparing to legally become the majority of tomorrow. But these, I was told, are legal abstractions and the wish to introduce technical rather than political elements into the system of checks and balances is contrary to a democratic constitution in which politics must penetrate all the mechanisms. I’m not of this opinion. I believe instead, and I will have the opportunity to return to this topic, that the safeguard of certain rights against political interference is one of the fundamental requisites of a democratic system and that it is therefore necessary that those who conceive this system do so in the humble spirit of the minority.

Stella Levi to Be Honored at the Museum of Jewish Heritage Alessandro Cassin interviews Stella Levi On June 2, CPL Board member, Stella Levi will be…