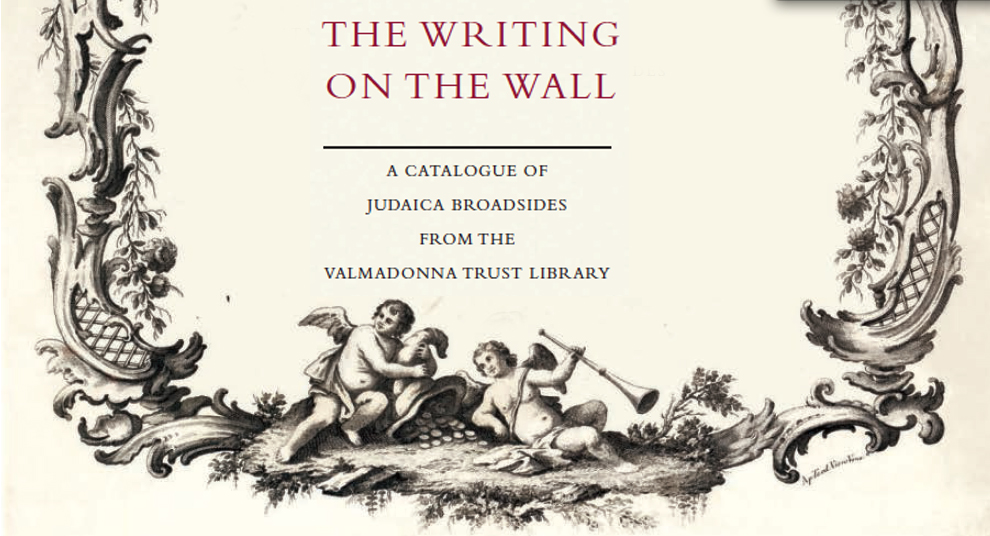 The Writing on the Wall. A Catalogue of Judaica Broadsides from the Valmadonna Trust Library

The Valmadonna Trust Library is the world’s single most important and extensive private collection of Hebrew books, and it has stimulated a remarkable level of fascination and admiration among scholars and laypeople alike. Assembled over the better part of the twentieth century, the Library comprises thousands of rare volumes from virtually all corners of the Jewish world. In addition to the vast quantities of Hebrew manuscripts and printed books in the Valmadonna Trust Library, there is a veritable “collection within a collection” of more than 550 broadsides. These amazing artifacts consist primarily of single sheets of paper printed on one side for public distribution or posting. While broadsides such as these have long served as important documentary sources of information for those who study the history of the Jews in the early modern era, there has been a marked paucity of systematic scholarly treatments of Judaic broadsides as a genre in their own right.

In preparing this volume, our first order of business was to enlist scholars from the academic community whose own areas of research had in the past made extensive use of the types of material found in the Valmadonna Collection. We asked Professors Dvora Bregman, Elisheva Carlebach, Ruth Langer, Nahum Rakover, and Adam Shear to compose scholarly essays so that this catalogue might benefit from their expertise. These essays, which open the present volume, will provide the reader with a richer contextualization and a fuller understanding of the materials.

Following the essays is a selection of highlights featuring full-color images of thirty-six broadsides, each image accompanied by a brief discussion of its content and background. These highlights are followed, in turn, by the catalogue proper, with 554 entries providing essential information and concise descriptions of each broadside in the Collection. The catalogue is supplemented by the following useful appended material: translations of the non-English highlights, a numerical conversion chart for the cross-referencing of catalogue numbers with preexisting Valmadonna Collection reference numbers, an index of first lines of poems, and a general index.
In the production of a volume such as this, there are always a great many people to acknowledge. First and foremost, we wish to express our deepest gratitude to Mr. Jack Lunzer, the indefatigable Custodian of the Valmadonna Trust Library. His passion and perseverance over more than six decades of collecting have built the Library book by book, broadside by broadside, and it is through his efforts that this project has been made possible.

We are indebted to Pauline Malkiel, librarian of the Valmadonna Trust Library, for her support of the project and for her unstinting devotion to the Collection. We would also like to thank David Redden and the staff of Sotheby’s for their ongoing assistance. In addition, the preliminary cataloguing by Isaac Yudlov and Ariel Viterbo of the Hebrew and Italian materials, respectively, as well as the translation efforts of Sylvia Simmons, laid the foundation for much of our own work.

Ardon Bar-Hama, whose groundbreaking photographic techniques have, within the past decade, revolutionized the field of digital reproduction of Hebrew books and manuscripts, has once again produced photographs of exceptional resolution and clarity of the entire collection of Valmadonna broadsides. While we are unable to include all of these hundreds of images in a publication of this scope and size, readers of this volume will have access to them online, via a dedicated website (valmadonnabroadsides.com). For the first time, individuals may undertake detailed examinations of these broadsides at will. We expect that with this widespread access, new perspectives will emerge and new connections will be made between the events, people, and places whose tales are told within these documents.

We are grateful to the administration and clergy of Congregation Emanu-El of the City of New York for their support in mounting the complementary exhibition of highlights from the Valmadonna Collection, entitled “The Writing on the Wall,” at the Herbert & Eileen Bernard Museum of Judaica, expertly assembled by Curators Elka Deitsch and David Wachtel and Associate Curator Warren Klein. That exhibition was enhanced, as is the present volume, by the inclusion of translations of selected broadsides, owing to the linguistic labors of Giuliana Carugati, Jeanine Plottel, Shaul Seidler-Feller, and Kitty Teerling.

Special thanks go to all of the many colleagues to whom we reached out with queries and who graciously took the time to provide us with answers and guidance: Yochai Ben-Ghedalia, Michelle Chesner, Yisrael Dubitsky, Gary Hausman, Baruch Kahane, Sarah Pearce, Ronnie Perelis, Angelo Piatelli, Menahem Schmelzer, David Sclar, and Bella Hass Weinberg. Finally, we express our gratitude to Jean Wilcox, remarkably talented designer, for her tireless efforts in making this work as physically beautiful as many of the treasures depicted within its pages.

It has been our distinct privilege to be able to bring this vast corpus of historically significant material to the interested public. As we examined and catalogued the many proclamations, decrees, calendars, poems, prayers, amulets, and charts that comprise this marvelous collection, each piece began to reveal its own personality, its own intricacies, and its own quirks. Each broadside yielded numerous bits of information: people’s names, the places they lived, the occupations they held, the tribulations they suffered, and the relationships they had (with Jews and non-Jews alike) –— in short, their lives. We were thus provided with a more nuanced comprehension and an even greater appreciation of the Collection as a whole. These hundreds of varied and sundry, sometimes seemingly unrelated sheets of paper, silk, and parchment have become, for us, the connective tissue that fills in many of the interstices in our understanding of the ways Jews lived in earlier centuries.
It is our firm hope that this volume will not only serve as a lasting testament to this storied collection and its venerable collector, but also as a valuable resource that inspires further learning, research, and expansion of knowledge for years to come.