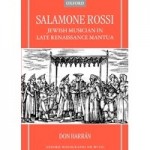 Don Harràn
Born in Cambridge, Massachusetts, Don Harrán did his undergraduate work at Yale University, majoring in French literature (B.A. magna cum laude, 1957), and pursued graduate studies in musicology, mainly under Edward Lowinsky and, as dissertation advisor, Joseph Kerman, at the University of California at Berkeley (M.A., 1959; Ph.D., 1963). He settled in Israel with his Israeli wife, who also studied at UC Berkeley, in 1963. During the years 1963–66 he taught music history at the Rubin Academy of Music in Jerusalem and, since 1966, has been a member of the Department of Musicology at The Hebrew University of Jerusalem, becoming Emmanuel Alexandre Associate Professor of Musicology in 1976, Artur Rubinstein Full Professor of Musicology in 1980, and since his retirement in 2004 Artur Rubinstein Professor Emeritus of Musicology. He chaired the Department of Musicology during the years 1977–80, 1991–92, and 1994–97. In 1993 he was Visiting Professor at the Center for Medieval and Renaissance Studies at the University of California, Los Angeles, and in 2004 Visiting Professor at Villa I Tatti (Harvard University Center for Research in the Italian Renaissance), Florence. He received various fellowships and grants, among them the American Council of Learned Societies (1974–75), the Memorial Foundation of Jewish Culture (1980–81, 1992–93, 2001–2), Newberry Library (Chicago; 1993), Folger Shakespeare Library (Washington D.C.; 1998), the American Philosophical Society (1975), the Gladys Krieble Delmas Foundation (1978), the Israel National Academy of Sciences (1976–77, 1982–84, 1985–87, 1988–89), and the Institute for Advanced Study (Princeton, New Jersey; 2001–2, 2004).

Salamone Rossi (c.1570-c.1628) occupies a unique place in Renaissance music culture: he was the earliest outstanding Jewish composer to work in the European art music tradition. In the field of instrumental music, he established the trio sonata as a standard combination of voices for 17th-century chamber music and developed the sonata into a vehicle of virtuoso display. In his vocal works, he wrote music to texts of some of the most fashionable poets of his day, including Battista Guarini, Gabriello Chiabrera, and Ottavio Rinuccini. The mannerist poet Giovan Battista Marino particularly captured his attention: with 33 settings of Marino’s verses, among them the remarkable Canzone de’ baci in eight strophes, Rossi stands in the vanguard of contemporary literary developments. Rossi composed a book of duets and trios (Madrigaletti) that paved the way for similar chamber works by Agostino Steffani and others from the late 17th and early 18th centuries. Last but not least, Rossi carved out his own niche in the history of sacred music by composing the first and only collection of polyphonic settings of Hebrew texts (his `Songs of Solomon’) before the mid-nineteenth century.
As a Jewish composer working for the Gonzaga dukes in Mantua, yet remaining faithful to his own religious community, Rossi has a biography fraught with difficult and often exciting questions of a socio-cultural order. How Rossi solved, or appears to have solved, the problem of conflicting interests is a subject worthy of inquiry, not only because we want to know more about Rossi, but also because Rossi can stand as a paradigm for other Jewish figures who, contemporary with him, moved between different cultures.

Reviews
This volume is a welcome addition to current studies of music and musicians in northern Italy during one of its most impressive periods of accomplishment, experimentation, and influence … From beginning to end there is much to admire.” – Shofar
“Sovereign mastery of secondary literature … written in flawless, jargon-free English … provides us with just about everything which will ever be known (and not known) about this interesting composer. The author is to be congratulated and thanked for having patiently brought to completion such a comprehensive and important undertaking.” – Renaissance Studies
“Harran’s book meticulously analyses, musically and statistically, the characteristics of all the music, and as well as placing it in both musical and cultural contexts, indicates its influence, not only in the sphere of Italian music, but within our own shores.” – Early Music
“Harran’s book is a musicological masterpiece. The book is written with a proficiency [dexterity, skills, abilities] that can only awaken envy, in a rich language and with exceptional exactitude. It is accompanied by a rich bibliography and an inclusive listing of Rossi’s works. For all that, there is not a trace of mere pedantry in it. On the contrary, its discussions are conducted with an end to broadening knowledge and against the background of the rich cultural agenda of both Italian Renaissance and Jewish culture.” – Ears for Music: A Gathering of Articles on Performance and Performers